Open GameThread: Dust Off the Boxing Gloves: Bengals vs. Cougars

Share All sharing options for: Open GameThread: Dust Off the Boxing Gloves: Bengals vs. Cougars 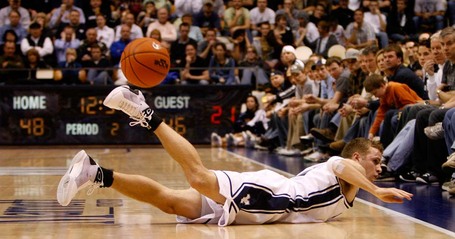 If any of you remember the game last year between these two teams you'll remember mostly for the wrong (but extremely entertaining) reasons...a near UFC throwdown by Idaho State's coach, players and fans and BYU. I don't expect that to happen this year, nor do I think this will be much of a game because it's in Provo.

The Bengals (0-2) played Bradley very tough Sunday in Illinois, losing 74-69. Idaho State has some terrific guard play with Broderick Gilchrest and Amorrow Morgan. BYU will need Emery and co. to bring it defensively against the Bengal backcourt.

Chris Dobbertean of "Blogging the Bracket" previewed Idaho State a couple weeks back:

Idaho State (last NCAA: 1987) The Bengals take on a difficult non-conference schedule, featuring road contests at Bradley, BYU, Iowa State, Notre Dame, Oregon, Utah, and Utah State, and a home game with in-state rivals Boise State. Like EWU, Idaho State also returns three senior starters, led by leading scorer Amorrow Morgan (13.6 ppg, 3.7 apg), a 6-5 senior PG who is one of five players on the roster who's from Memphis. That number includes 6-0 JC transfer Broderick Gilchrist, who could replace the team's second leading scorer from last season, Matt Stucki (12 ppg), who graduated. Expect to see 6-8 Demetrius Monroe, who averaged 6.5 points and over 5 boards a game off the bench, get more playing time this year.