The season may not officially begin until November 13th versus Bradley, but now that Cougar Tipoff is past, preseason rankings and media predictions are submitted, and the football team's conference title hopes have gone the way of the dodo, it seems appropriate to preview the upcoming season. So read the official '09/'10 official prospectus if you haven't done so already and let's begin.

Lee Cummard, G/F - The Cougars' best overall player for at least the past two seasons. Cummard put up 16.8 PPG and 6.2 RPG last season, twice finished on the MWC First-Team, and was the MWC Co-MVP and an Honorable Mention AP All-American in 2007/08.

Tyler Haws, G - Prepped at Lone Peak HS (as did incumbent guard Jackson Emery) in Utah County. Arguably, had the greatest high school career in state history. Finished as the Knights' all-time leading scorer (1,772) and won two state titles (nearly three). Haws isn't the best creator but he is an unbelievable finisher. That should work to his benefit during his freshman season as he'll be surrounded with some players (like Emery) with the ability and experience to find him on the break. Haws has the most upside of any BYU guard since Travis Hansen. Of course his dad, Marty Haws was a terrific guard for the Cougars during the late '80's. He has a nice perimeter game that could improve but he is an excellent rebounder for his size. He should see a lot of minutes during his freshman season prior to leaving on an LDS mission next year.

Brandon Davies, F - Just as Haws has tremendous upside, that can be said here as well. Davies is another local product (Provo HS) with major upside. He is very strong and possesses good fundamentals for a big man his age. What he lacks in quickness/agility, he makes up for in strength and efficiency in his footwork/ball control. Davies is a decent shot blocker as well. Again, like Haws, Davies should see some significant action this season and be a huge part of the Cougars' success over the next several years.

Brock Zylstra, G/F - Zylstra is back after serving an LDS Mission. He red-shirted in 2006-07. Zylstra is a smart, athletic wing from Southern California. He should provide some nice depth behind Emery and Haws but likely won't be a key member of the rotation. Zylstra should merit some minutes though, especially early in the season, and figures to play a larger role next season after Haws leaves on his mission and Tavernari graduates.

Logan Magnusson - G/F - Magnusson was one of the key contributors to Salt Lake Community College's team that won the NJCAA Division I National Title last season. (Magnusson played at Dixie State before that.) Magnusson won't provide the Cougars with much offense but is a nice guy to have on Rose's bench - a scrappy wing player with good size that defends well and rebounds aggressively.

It is likely to depend on the opponent whether or not Rose starts Tavernari at the 4 rather than Hartsock (or perhaps Davies). Obviously that isn't his natural position and he understandably has a difficult time trying to defend true PF's in the post. However, he provides some major problems for teams that try to defend him on the perimeter with less mobile big-men. The problem with starting Tavernari at the 3 is that both Abouo and Haws have the talent to merit serious floor time there. It's a nice conundrum and one that should easily work itself out during the early part of the season.

Despite Tavernari's lack of size at the 4, the Cougars post players are as good a group collectively as the Marriott Center has seen in many moons. Miles figures to be improved with experience and is a substantial upgrade over Gavin MacGregor. (Though I hear G-Mac plays a mean trombone.) Hartsock is a year removed from his mission and should be dramatically improved in terms of both conditioning and skill-set. Of course there is Davies as well. And finally Anderson is a solid shot-blocker that isn't a horrific option of the bench when the others get into foul trouble.

The starting guard spots are final: Fredette and Emery. Of course, you know all about Jimmmmer and his crossssover. Some fans are so enamored with the aforementioned move you would have thought Tim Hardaway had transferred from UTEP. Still, Fredette is a fiery competitor, has a knack for getting into traffic and drawing contact and has greatly improved his perimeter game. His status awarded by the media as preseason MWC MVP appears a bit outrageous on its face but he is likely to be the best all-around player on the team this season. Morgan and Loyd each have their strengths (speed) and weaknesses (shooting, size) but are serviceable backups.

Emery, like Hartsock, should benefit exceedingly from having been home from Mexico for over a year now. When he's healthy he is the Cougars' best defender and possibly the best on-the-ball defender in the conference. I'm really looking forward to seeing him play this season. Emery is the ideal player to put beside Fredette as he doesn't demand the ball and Jimmer is so ostensibly pass-second. 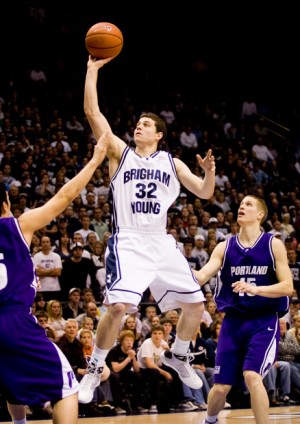 BYU has a much weaker non-conference schedule than the past couple seasons that saw them pitted against North Carolina, Louisville and Wake Forest (to name a few). This year they do travel to Utah State, Fresno State, Nevada, Arizona and UTEP however. They also host Arizona State. Utah State lost forward Gary Wilkerson though and Arizona is in rebuilding mode after losing Chase Budinger (who is playing well so far for the Rockets I might add) and Jordan Hill. Nevada has a nice player however in Luke Babbitt and Fresno and Steve Cleveland has a good prospect as well in Paul George. Finally, the ASU game is interesting considering the Cougars actually won in Tempe last December (Andy Katz is a jerk) and the Sun Devils have since lost James Harden and Jeff Pendergraph. Add in the fact that the game is in Provo and the Cougars should win that game.

The Cougars should have a very good record going into conference play. That's 15 games into the season and I see no reason why BYU can't be 13-2 at that point.

In terms of conference play it will be interesting as always. Utah, of course, lost Luke Nevill, Shaun Green, Lawrence Borha and Tyler Kepkay all to graduation. It ought to be a rebuilding year in Salt Lake. UNLV lost Wink Adams, Joe Darger (goodbye faux-hawk!) and Rene Rougeau. Still Lon Kruger added some very nice transfers in Derrick Jasper (Kentucky) and Chace Stanback (UCLA). The Rebels may not be as deep as they've been in recent years but they'll still be dangerous with Tre'Von Willis and Matt Shaw as well. San Diego State also lost some experienced players but the Aztecs have added Kawhi Leonard, a freshman G/F from Riverside, CA. Leonard could have played anywhere and most expect him to impact the MWC immediately.

New Mexico has to be excited for basketball even if they weren't going to be that good right? Well, the Lobos should compete again for the conference championship. Despite losing Tony Danridge and Daniel Faris there remain some nice players in Albuquerque. That includes Phillip McDonald who, like Leonard, had his pick of schools to choose from coming out of high school.

So those are the traditional "powers" in MWC basketball. Wyoming, Air Force, Colorado State round up the rest of BYU's conference schedule but none of those programs are likely to compete for the conference championship this season. Of course the Rams should be improved - Andy Ogide could be either a dud or all-conference.

In summary, BYU biggest competition should come from UNLV. SDSU and New Mexico should also be solid. BYU however appears to have the most experience and the most depth of any team in the conference. Combine that with the Cougars' track record at home and they should actually improve on their 12-4 record from last season. I think they can win 14 conference games and go into the MWC tournament with a 27-4 record.

It's not like I'm going out on a limb here. The MWC Media, Athlon, Doug Gottlieb (ESPN), USA Today and Yahoo! Sports have all projected the Cougars to win the conference with a similar record. Athlon projected BYU to be a 5 seed in the NCAA Tournament and Joe Lunardi has them as a 7 seed. I think those seedings are realistic and attainable for this club. And as we've seen multiple times over the past decade, if the Cougars are finally going to get that infamously elusive tourney win in March, they'll need to be seeded at least as high as 7.

There's a lot to look forward to, especially after the roller-coaster of a football season we've had in Provo. Hopefully, Cougar fans can find some stability in an unlikely (at least in terms of the erratic Tavernari being called "stable") source.