Share All sharing options for: Hook 'em Horns: BYU To Face Texas in 2011 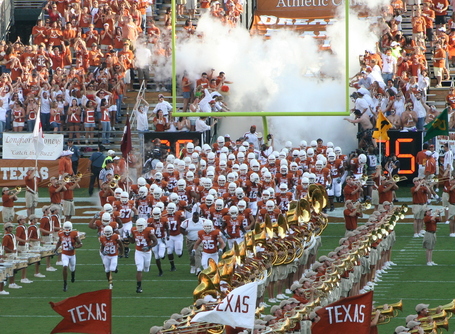 Well, Bronco certainly isn't afraid to play anybody, anywhere. The announcement from BYU today is that the Cougars and the Texas Longhorns are going to two-step in Austin on September 10, 2011.

I'm sure the decision from BYU to accept has a lot to do with 1) BYU is 43-9 over the last four seasons, and 2) they beat Oklahoma in what was basically a home game for the Sooners. Sure, Oklahoma disappointed this year, but with a healthy Bradford, they likely would have been playing for a Big 12 championship.

I don't see this as a big risk, either. Why? First and foremost, in 2011 BYU will most likely not need to be proving itself to the country because the MWC will be set to join auto-bid BCS leagues already in 2012. Secondly, IF they get beat they won't get killed--a close September loss to Texas doesn't hurt you all that much in season long race.

How can I be so optimistic about things? This year's recruiting class will have an entire season under their collective belt. And if the Cougars win, it's just another feather in the cap and a kick start to a potential BCS bowl game in 2011. It's no surprise they seem to be scheduling these bigger games when they play both TCU and Utah at home. Do you really thing Bronco is stupid enough to face somebody like Texas or Oklahoma on the road when they already have to face TCU and Utah on the road every other year???

It's a long way off but it's something to get really excited about. Just another huge opportunity on the national stage.