Share All sharing options for: BYU bye week: A focus on recruiting

With a bye this week the BYU coaches will be able to get out for that all so important mid-season recruiting trip.  While coaches are not allowed to formally contact players in person on these trips, I can remember many "chance" encounters with college coaches during my junior and senior year of high school.

After practices wrap up today the coaches will be heading out onto recruiting trail so I thought I would offer up some of my views on recruiting in general and specifically at BYU.

When I was at BYU people would always ask me what I thought about us recruiting this guy or that guy.  99% of the time I didn’t have a clue who they were talking about.  Mainly because I never followed who BYU was recruiting anyway.

The fact of the matter is, at best recruits are 50/50.  Meaning 50% of the time they live up to the hype and 50% of the time you never hear about them after they sign that ever coveted LOI.  I never get involved in recruiting talk because it really doesn’t matter what guys did in high school.  College is a completely different level and I feel before I start hyping anyone up, they better be able to perform in their new surroundings.

Think about this for a minute.  In college there are 85 guys on scholarship…85!!!!  Only 22 of those guys start and probably only 40 get game time at best.  Interesting how that number 40 is about 50% of 85.  That means coaches get the recruiting right about ½ the time.   Now I know what you are thinking.  You are thinking, well part of those 85 guys are young and will end up being contributors later in their careers.  That is true, but that is not what the fans are concerned about.  Look at the Jake Heaps situation.  How many fans would have accepted anything less than Jake Heaps starting as a true freshman, even if it meant wasting a year of eligibility on a re-building team?  Before the season?  I think I was on my own on that take.  Now?  Maybe I have a few more people in my corner.

There is a reason why the draft is on TV and LOI day is not.  I bet the draft ratio of Success v Bust is more like 80/20.  Why?  Because NFL teams can’t afford to have the sideline littered with mistakes.

A lot of people have been commenting to me that BYU was supposed to have all these great recruits, yet the team is terrible.  Where are all those great recruits?  Well BYU is presented with a challenge that very few understand.  They not only have to plan around entering and exiting players due to graduation, but they also have to plan around two year church missions.  Some players leave before enrolling in college, some players red shirt or play for a year and then leave.  Others like Russell Tialavea, will leave later in their football careers.  The odd thing, is that coaches often have to adapt to the changing minds of 19 year old boys, who can’t decided when to go or if they want to go.  This is a challenge I don’t think anyone understands, unless you have been a coach at BYU.

Most schools pride themselves on winning the in-state recruiting battle.  But that should not be BYU’s focus.   I recall watching the Boise St. v Oregon St. game when the starters were announced for Boise St.  How many of them do you think were from Idaho?  I don’t know that there was one.  I kept hearing Los Angeles, CA.  I have to laugh when I look back at a specific time in my career at BYU when there were 8 players from a Utah high school team at the same Division I college.  That was a high school team that did not even win the state championship.  You can’t tell me that one team had that many DI quality players on it.  I get to watch, locally, some of the top teams in the country, and they don’t even have that.  My one disclaimer is that the heavy recruiting done at Timpview High School has been very successful, with two exceptions.  And really it's not to say that Utah doesn't have great talent, because I played with a lot of guys from Utah that were outstanding.  I just think we are a little too heavy on the local recruits.  I have prepared a little chart below that show the quality of recruits as determined by who is drafted into the NFL. 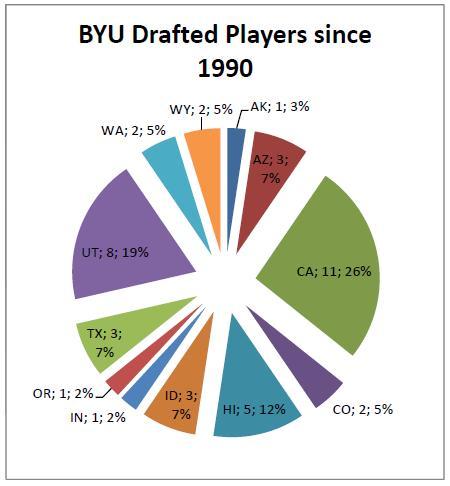 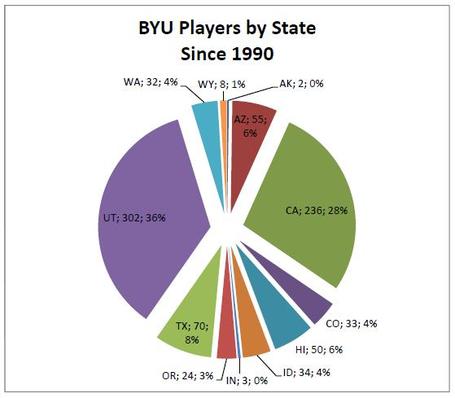 Disclaimer: This graph shows all players from the states represented in the NFL that appeared on BYU's rosters since 1990.  It does not represent the number of scholarship players only and can include all walk-ons.