BYU v UTEP: The Real Meaning of the (Bowl) Season

Share All sharing options for: BYU v UTEP: The Real Meaning of the (Bowl) Season

When I arrived on campus in 2001 as a freshman, I was so excited to be a part of BYU football's bowl game tradition.  In fact, I basically expected the fact that BYU would go to a bowl game every year I was there.  I didn't know that it could be any other way.  What I didn't know as an 18 year old, was how changing the bowl game approach, would change my BYU experience, and my life forever.

That year, 2001, Coach Crowton led our team to an amazing 12-1 record which landed us in the Liberty Bowl in Memphis, TN to face the Louisville Cardinals.  That week was an amazing time for a young kid.  We were showered with gifts and paraded around town like celebrities.  Guys were going out each night after practice to paint the town, as we had 1 rental car per 4 players assigned to us.  I happened to be paired up with my roommate, Lance Reynolds Jr.  It was perfect, as Lance served his mission there and knew everything and everyone in town.

I remember two distinct things from that bowl experience. 1) We had a 6am practice under the lights, in the snow, in Provo the morning we left to fly out to TN.  2) just before half time all the girls from the Miss America pageant were waiting on our sideline.  They were all in the skimpy pageant dresses and it was about 40 degrees.  I offered my coat to one girl while she waited and she had to decline "as it would not be professional to cover up."  Ah the price of beauty.

As you can tell the memories did not have an eternal impact on my life.  We spent the week playing around and quite frankly got our butts kicked on game day.

Fast forward to post mission, red-shirt freshman year in 2004.  This was the year reality hit me.  With only 5 wins we would be home for the holidays.  The worst feeling there is.

In 2005 we made it back to the bowl scene under Coach Mendenhall and headed to the Vegas Bowl, for the first of what would be many trips for the BYU Cougars.  That week was much like the week spent in Memphis.  We flew to Vegas on a Sunday and most of us spent the evening in the EA Sports room at the hotel and walking around the strip.  That night Justin Leuttgerodt made the most profound statement to me.  I remember clear as day him telling me on "The Deuce" (the double decker bus that shuttled us to the strip from the Golden Nugget) "If guys will just do what they're supposed to this week, and do all that "Vegas" stuff we will win this game."  Well, I don't know what guys did that week.  I didn't hear of anyone doing anything out of line, but maybe we just weren't doing enough right, and we lost a close game to the University of California Golden Bears.

In 2006 as we prepared to go back to the Vegas Bowl, this time to face the Oregon Ducks, Coach Mendenhall made it clear that our approach this time would be different.  Once again we traveled on Sunday, but this time we were greeted with the opportunity to host a fireside, which got the week off to a fantastic start!  Then as we went throughout the bowl activities and practice we also were given the opportunity to fill our free time with service projects.  Some players went to the children's hospital, others put on a football clinic at the Boys and Girls Club.  I had the opportunity, along with many of my teammates to go to a home/school for less fortunate youth and we repainted their buildings and got to interact with the young men over the course of an afternoon.  It was the best bowl experience I had had, up to that point.  It made me feel great to know that when these boys thought of college football, they would always remember the time the Cougars came to town for a bowl game and they took the time to come and help out.

In 2007 we went back to Vegas for the third straight year to take on the UCLA Bruins in a great rematch. This time with the winning formula already in place.  We put on the fireside, we went through practice and bowl game festivities and when it came time, we gave back to the community that was giving so much to us.  This time I was able to have my wife come along and enjoy the service with me, which was even better.  We went to the Boys and Girls Club in a rougher stretch of town and every player (and their wife is applicable) was assigned to a child to play games with, read to, do a Christmas art project with, etc.  We had a blast!  I will never forget how sad our little friend was when we had to go.  He gave my wife and I a huge hug and just wouldn't let go.  It was touching to me to realize that in a few short hours we were able to touch a life that much, and it saddened me that he did not have anyone else in his life to give him that attention.

So this time of year, as the Cougars head off to New Mexico, most people will be focused on the outcome of the game on Saturday.  For me it stirs the emotions of the opportunities we were given throughout the bowl week, to give back to the community and touch the lives of people we have never met, nor will see again! 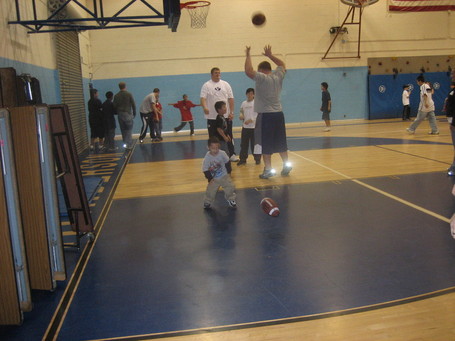