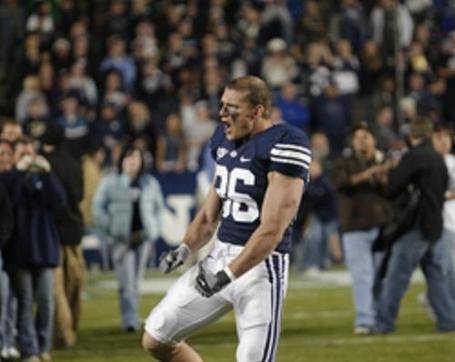 Hello VTF Nation!  My name is Markell Staffieri and I am a recent addition to the VTF Team.  I though I would shoot out a quick post to let you all peer into my life just enough to know where I am coming from.

BYU sports are in my blood!  My father Mike Staffieri played baseball at BYU back when they were going to Omaha every year.  After playing in the Reds organization he came back to BYU as a coach in the early to mid 80s, welcome Markell.  As a young kid I will never forget the tailgating at Cougar Stadium (LES) or sitting in the baseball dugout with the guys!  Man those were the days.  I grew up hoping, dreaming, striving to one day be a cougar, just like my dad...sappy but true!

The chance finally came in 2001 when I walked on to the 12-2 Cougar Football team.  After serving a mission I came back to BYU for the 2004 season.  I started at outside LB in my first college game against Notre Dame and continued to start...injuries permitting...until graduating in 2007 after beating UCLA in the Las Vegas Bowl.

What I hope to offer you out there is an opportunity to get a player's perspective on BYU football, their mission, the team, the coaches and the players.  What are they going through?  How are they living up to the standards that have been set and the goals they have made.

Aside from game prep and analysis one of my main objectives this football season is to shine some light on how this team, even during the season, works hard off the field to promote change in our communities.  These post will be part of a segment called "Tradition, Spirit, Honor."  The fact is the BYU football team does a lot of things on a daily basis that nobody knows about.  They are truly unsung heroes!