Share All sharing options for: BYU vs. Air Force - More than Football

It's hard to go to Colorado Springs to see an Air Force Academy football game and not be moved.  From the beautiful scenery, pregame fly bys and parade dressed cadets to the joining in song after each game, win or lose, to honor those who serve, these games run deeper than sports and so it is this September 11th weekend.  Especially for a former cadet who now bleeds another shade of blue.

Paul Peterson was just a young cadet at the Air Force Academy in Colorado Springs, Colorado when he was introduced to and joined the Church of Jesus Christ of Latter Day Saints, the church which owns Brigham Young University.  Upon graduating from the Academy Paul served in the Air Force for five years and then moved his family to Orem, Utah.  Somewhere along the way Paul turned in his royal blue heart was tinted a tad darker as he began to root for a second college football favorite, the BYU Cougars!

Just over four months ago, Paul's family noticed that his speech was becoming slurred and harder to understand.  Paul underwent an MRI which revealed that he had a 10mm glioblastoma stage four tumor, the most aggressive kind of brain tumor.  The surgery left Paul with severed nerves which control the facial muscle that would allow him to speak.  For months he struggled to speak at all, but slowly began making progress as the muscles began to strengthen.

Then last month Paul began showing signs that something else was going on in his body.  He underwent another MRI which revealed a 7mm tumor had grown in place of the one that was previously removed.  Paul went back into surgery to have the second tumor removed, but that did not stop him from cheering on his team.  Paul was able to watch the home opener against the University of Washington on his iPhone.  While Paul was cheering on the Cougars his wife threatened to take the iPhone away, as he needed to rest.  After all this was only 24 hours after major brain surgery, but Paul and the Cougars prevailed. 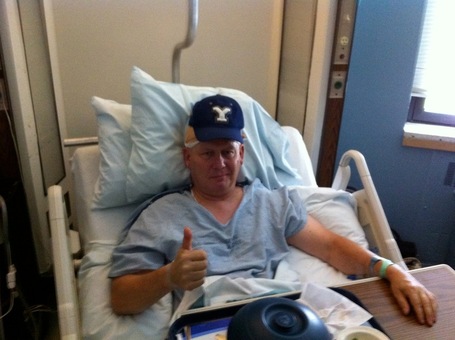 Paul was honored thursday after the Cougar's practice as part of BYU Football's Thursday Hero program and is intent on returning to Colorado Springs, his alma mater, to watch his Cougars and his Falcons fight it out to the end.  Of the game, Paul said it will be hard to know which side to sit on or who to root for.  One thing is for sure, Paul we here at Vanquish the Foe will be rooting for you and admire you for your strength in adversity.