Share All sharing options for: A Deep Cleansing Breath

Two weeks ago I came out of the Fieldhouse, okay, I'm running across the parking lot, there's a car waiting, I got exactly 58 minutes to get to the airport and I'm dictating. There's this, this panicked intern sprinting along beside me, scribbling in a notepad, and suddenly she starts screaming, and I realize we're standing in the middle of the street, the light's changed, there's this wall of traffic, serious traffic speeding towards us, and I... I-I freeze, I can't move, and I'm suddenly consumed with the overwhelming sensation that I'm covered with some sort of film.

It's in my hair, my face... it's like a glaze... like a... a coating, and... at first I thought, oh my..., I know what this is, this is some sort of amniotic - embryonic - fluid. I'm drenched in afterbirth, I've-I've breached the chrysalis, I've been reborn. But then the traffic on University Parkway, the stampede, the cars, the trucks, the horns, the screaming and I'm thinking no-no-no-no, reset, this is not rebirth, this is some kind of giddy illusion of renewal that happens in the final moment before death. And then I realize no-no-no, this is completely wrong because I look back at the building and I had the most stunning moment of clarity.

I... I... I... I realized Cecil, that I had emerged not from the doors of the BYU Athletic Department, not through the portals of our vast and powerful university, but from [...] an organism whose sole function is to excrete the... the-the-the poison, the ammo, the defoliant necessary for other, larger, more powerful organisms to destroy the miracle of humanity. And that I had been coated in this [....] for the best part of my life. The stench of it and the stain of it would in all likelihood take the rest of my life to undo. And you know what I did? I took a deep cleansing breath and I set that notion aside. I tabled it. I said to myself as clear as this may be, as potent a feeling as this is, as true a thing as I believe that I have witnessed today, it must wait. It must stand the test of time. And President Samuelson, the time is now."

Tom Holmoe might as well have been Arthur Edens dictating a message to Michael Clayton. This message would have been produced and received as early as 2005 (depending on whether you believe Holmoe or not). But instead of waxing philosophically on his general servitude to an agricultural products conglomerate manufacturing carcinogenic weed killer, it would have been elaborating on the school's dissatisfaction with its MWC affiliation - and, more specifically, with the distribution of athletic broadcasts to Cougar fans and the public generally. 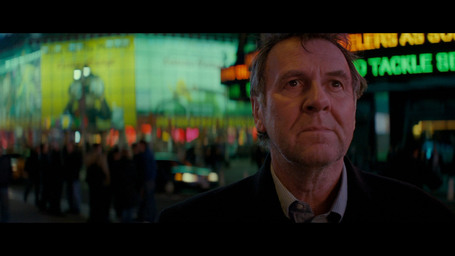 Because, at least as far back as 2006, when the MWC elected to discontinue affiliation with ESPN because of a conflict over game schedules and financial compensation, both BYU and Utah began expressing their concerns over broadcast distribution (among other complaints). Attorneys were consulted, board meetings were held, and reports were delivered. New, state-of-the-art broadcast facilities were constructed and access to innovative technologies were obtained. Because, despite The MountainWest Sports Network not being exactly lethal pesticide, it would preclude the BYU from attaining its goals. These goals were, in part, reiterated by President Samuelson two weeks ago:

"We've long sought broad, nationwide access to our games for our fans and increased visibility among those who may be less familiar with our university and athletic programs."

For further clarification of these objectives, we can look higher up the ladder:

"I don't believe any of us fully realize what we are starting here today. I know we have somewhat of a vision, but I think it's limited compared to the reality of what we will know and see a few years after this building is erected and operating.  This broadcasting effort from Brigham Young University has the potential of being the voice that will be heard around the world, that will be the voice of the Lord, that will take head-on the contest that is going on in the world between good and evil."

That second quote is from Elder M. Russell Ballard's address at the groundbreaking ceremony for BYU's new broadcast facility in May 2009.

One third of the mission of the LDS Church is to proclaim the Gospel of Jesus Christ. Obviously football has nothing to do with the Gospel, but it accomplishes something that tens of thousands of 19-year old missionaries around the world cannot: it can get into the home via satellite instead of the front door. So, visibility is everything, and the Church hopes that while someone will watch BYU vs. Notre Dame from their La-Z-Boy in Mortons Gap, Kentucky, or with their laptop in Mombasa, Kenya, and think, "Hmmm. That inside linebacker lived in Nairobi for two years and speaks fluent Swahili?" or "Wow. That fullback has never touched a bottle of bourbon in his life? How is that possible?"

Call it ‘televangelism' if you will. But that is what the priorities are in Provo, and they've proven it...again.

For BYU to be hampered by unmerited revenue sharing and lacking control of its television rights, these goals have been largely unreachable.  One must also consider that, now, bigger schools with a deservedly greater share of their conferences' income are recognizing that they can sell their broadcast rights separately - and make a greater profit (see,Texas at Austin, University of).

BYU has realized that it can 1) better accomplish the visibility goals of the LDS Church, AND 2) make more money by controlling its own rights. (And in that order...the LDS Church isn't completely impecunious.)

The time was now.  Actually, the time was several years ago when The Mtn. experiment began.  And you can bet that Holmoe took that deep breath in 2005/2006 and realized that if his athletic department was going to allow the school to reach its lofty goals then they must wait.  Wait for legitimacy.   Only with said legitimacy does any of this materialize in the present.  So, kudos to Coach Mendenhall, Coach Rose and everyone else.

Critics may call BYU greedy and disloyal, but in reality this is all about a unique, broader perspective.  And if that comes across as self-aggrandizing, well, sorry.  Maybe it's because BYU has been your school's meal-ticket for awhile.  But really, as Clooney's title character so bluntly stated, "...there's no play here. There's no angle. There's no champagne room. I'm not a miracle worker, I'm a janitor. The math on this is simple. The smaller the mess the easier it is for me to clean up."

After this year BYU is done cleaning up the MWC's mess.