It should be a terrific next 24 hours as both the BYU basketball and football teams will be in action. The Cougar roundball squad opens West Coast Conference play in Moraga against St. Mary's while the football team will face off with Tulsa in the Armed Forces Bowl tomorrow morning in Dallas. Surprisingly, both sets of Cougars are underdogs in their respective match-ups. St. Mary's is a 4-point favorite tonight; Tulsa is a 1-point favorite tomorrow. If you take the over/under and combine with the point spread, Vegas sees the Gaels beating the Cougars 75-71 and the Golden Hurricanes eeking out a 28-27 victory over Bronco Mendenhall's boys. Let's just say I don't see either happening. But, who knows.

Aren't these the times you wish you had your hands on Biff's Almanac from Back to the Future II? 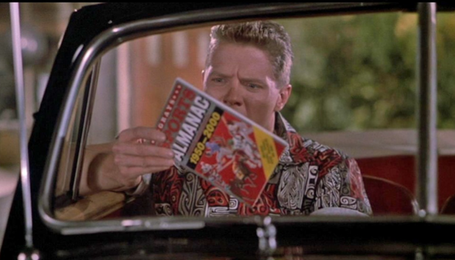