Share All sharing options for: Know The Foe: Rugby

As we all know BYU will play Cal in the College Premier League Rugby National Championship at Rio Tinto Stadium today at 7. Like many (all?) of you I don't follow rugby. In fact, my only rugby experience previous to this year is watching Forever Strong. (If you haven't seen that movie I highly suggest it.) To prepare for the match I decided to do a little research and get to know a little bit about the game of rugby. Here's what I got out of it. (With a little help from Wikipedia.)

A lot of people think of rugby as being like football, mostly because they're both contact sports. But when I was watching BYU's semifinal match against Arkansas State it looked more like soccer. (Probably because they both originated in England.) It's still resembles football except it's more free flowing and uses less pads. The aspect that most resembles football is the scrum and the scoring. But I'll get into that later.

Rugby can be defined thusly (via google):

A team game played with an oval ball that may be kicked, carried, and passed from hand to hand. Points are scored by grounding the ball behind the opponents' goal line (thereby scoring a try) or by kicking it between the two posts and over the crossbar of the opponents' goal.

There are two types of rugby, rugby union and rugby league. From what I can gather there are slight rules differences and and centimeters difference of ball shape. What BYU plays is rugby union, so that's what I'll focus on.

Each team starts with 15 players on the field. Players may be replaced for injury or substituted. Unless a player is replaced temporarily, as to stop bleeding, he may not rejoin the game. A player who has been substituted may return to the game temporarily-if replacing another player for blood injury-or permanently if replacing a front row forward.

To begin a match captains flip a coin to determine which team kicks off. The kick off consists of a drop kick and play begins. When a team has the ball they have the option to run it, pass it, or kick it. If they choose to pass the ball it must be done behind or laterally. Forward passes are not allowed. There is also no blocking in rugby as there is in football. Only the player with the ball may be tackled and tackling does not result in an end of play. The final option, kicking, is used to get the ball down field. Usually this is done when a team is backed up in their own territory or as a quick means to move the ball.

Like I said above the scoring in rugby is very similar to football. A try is scored by getting the ball into the in-goal area, kind of like a touchdown. Subsequently a conversion is kicked, much like a PAT in football, that is worth two points. Which makes seven points overall-sound familiar? The conversion is kicked through H shaped goal posts with the vertical ends 5.6 meters, or approximately 18 feet, apart.

A team can also score by kicking the ball through the goal posts via a penalty kick or a drop goal-both of which are worth three points.

A drop goal, also called dropped goal or field goal, is achieved when when a player drop kicks the ball in open play between the uprights and over the cross bar. The ball cannot touch the ground after it is kicked but it may touch the goal posts.

Scrum: Also called scrummage. A restarting of play after an infringement. The two teams line up as shown below and the ball is placed in the middle by a player of one of the teams.

Knock-on: When a ball. is knocked forward by a player and it touches the ground or another player without the original player regaining control.

Touch: Out of bounds.

Line-out: Means of putting the ball back in play after it goes into touch. One player throws the ball into play as the teams line up and lift a player to catch the ball. The Cougar Caption is another example of a line-out. Line-outs are not used in rugby league.

Advantage: If one team commits an infractions that can result in the opposing team gaining tactical or territorial advantage the ref will call advantage and play will continue like normal. Otherwise it would go to a scrum or penalty/free kick.

Ruck: Rucks are formed when at least one player from each side bind into each other with the ball between them. They usually form after a tackle. Other players may join the ruck but must be behind the last player in the ruck. Players cannot use their hands to get the ball out of the ruck. Typically they push forward and use their feet to knock it back.

Maul: A maul is similar to a ruck except the players are still standing. If a maul stops moving forward the ref stops play and rewards the team that didn't have possession of the ball with a scrum.

I mentioned a most of the law, or rules, above-like no forward passes, blocking, touch, knock-on, and others-so there's not much more for me to cover here.

Some of the most common infractions are tackling above the shoulders, collapsing a scrum, ruck or maul, not releasing the ball when on the ground, or being off-side. After a penalty the non-offending team can choose one of several options. They can punt the ball, do a place kick-where the kicker attempts to score, a scrum, or tap-kick it. Tap kicking basically what it sounds like, the kicker tap kicks the ball to go a short distance, then picks it up and runs with it.

Like I said before there are 15 players on the field at a time; 8 forwards and 7 backs. The forwards are numbered one-eight and the backs 9-15. The forwards are typically larger and are the ones that participate in the scrum and line-out. Backs are smaller and more agile and are the goal scorers. Because I don't understand it fully I'll just post some pictures so you can get a general understanding. 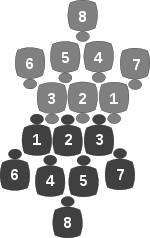 These are the numbered positions of the forwards participating in a scrum. 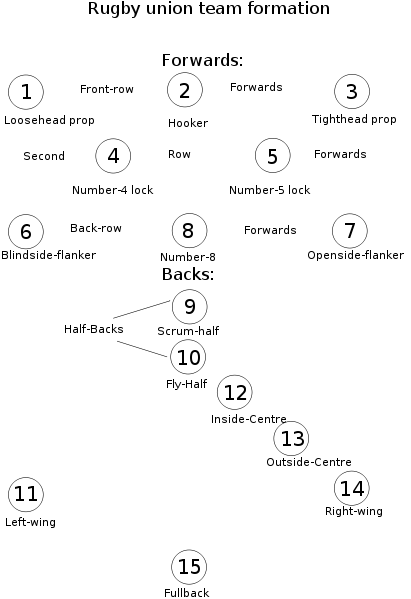 Here are all the positions of rugby.

If you want to read up some more about rugby here and here are the Wikipedia pages I used.

The game starts at 7 mountain time and can be watched at here. (ESPN3.com) You can also catch it on tape delay on ESPNU at 8 AM tomorrow morning. If you haven't seen them already here's a preview from BYU's official rugby site and here's the Q&A RSL Soapbox did.