First of all, I'm not a beat writer.  So it you want that type of stuff you can go somewhere else to find it.  My purpose is to supply you with a different perspective than the usual game review.  This was the first time I've ever had media credentials for a game, so it was a new experience for me (basically, I didn't really know what I was doing).  VTF was approached by the Octagon Agency about obtaining credentials, and since kwlarson didn't want to ditch his wife, I took advantage. 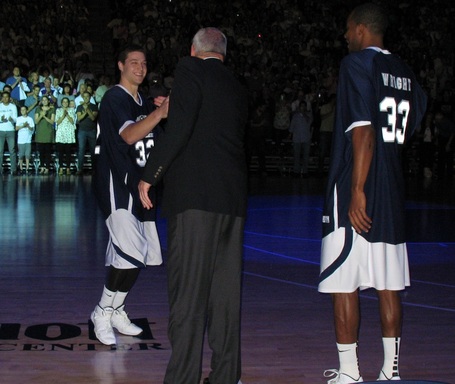 Apparently, before the game, some crazy dude got kicked out of the Marriott Center for trying to peep on Jimmer as he was taking a shower.

...That was the first thing I wrote in my notes, that's kind of a taste of what this is going to be like for you as a reader.

During warm-ups, the players were putting on quite a show with their dunks.  BYU has done this, but when everyone on the team can pull off some sweet dunks, it's a little more entertaining than a bunch of white dudes softly tossing the ball over the rim while simultaneously making contact with it.  This is called foreshadowing.

As the game started, it became obvious that the crowd was completely bias towards 'Team Jimmer'.  ...and then later towards Isaiah Thomas.

The game was more competitive than I thought it would be.  It was pretty legit, and very entertaining.  It was a style of basketball that Provo isn't really accustomed to.  Something that became noticeable early on was that there were only two white guys on the court...in Provo, and that just doesn't happen.

They were going pretty hard, it wasn't just your typical exhibition/all-star game.  These guys played as though they were trying to prove something, like they belonged.  To me, that is when sports are genuinely awesome.

You all probably saw the game (if you didn't, WTF?) and have already read some summaries and stats.  I'll spare you that, and instead I will list some of my observations from the game: 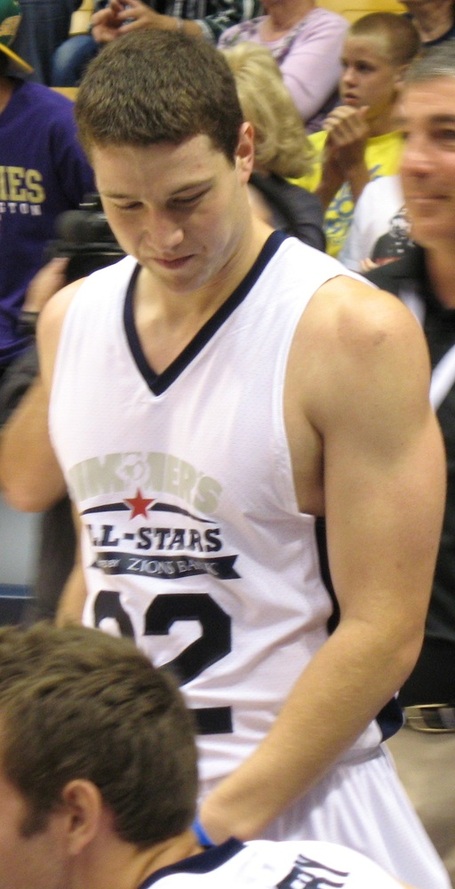 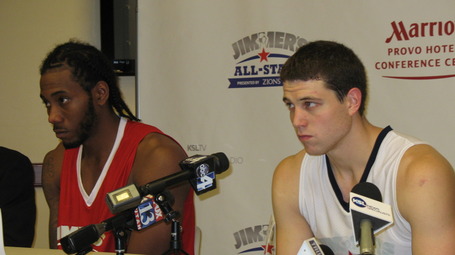 I had a bunch of stuff to plan for my class tomorrow, so I only stayed for the main presser, which was the coaches and two captains.  Things that I liked that I heard:

Overall, it was a freakin' awesome game.  Very entertaining.  I don't think people realized that it was going to be like this.  Had they known, it would have been full.  It was great to hear people say things like, "best $120 I've spent in a long time."  Leading up to the game, it seemed like lots of people were complaining about the prices and all.  Now, I think they are rethinking that.

Seriously though, this was the perfect thing I needed given the last two weeks of BYU football.