On The Road: Mingling in Malibu for BYU at Pepperdine

Share All sharing options for: On The Road: Mingling in Malibu for BYU at Pepperdine

Presten Norton debuts on VTF with his travel diary for the Pepperdine game.

It's only taken me a couple trips inside the WCC to realize that as much as I miss some of the great and heated rivalries of the MWC, I don't miss the cities at all! Our old friends in the Mountain West have had fun jabbing the WCC for small venues and attendance, but let's be honest, did we ever see more than 2,000 in Laramie? If you could only pick one game a year to attend, would you rather go to Albuquerque or San Francisco; Fort Collins or Malibu; Laramie or Portland? I rest my case. Here are the details of my trip to Pepperdine:

Multi-million dollar homes, Bentleys, BMWs, Jaguars, Range Rovers, college dorms, resorts, beachfront cafés...wait, dorms? Oh, you mean you didn't get to do your daily homework while looking out over the cliffs in Malibu either? Coach Hall (played 1 year at Pepperdine before transferring to Dixie/BYU) joked, "It was always easy to find the athlete's cars in the parking lots here, just look for the Hondas!" Don't get me wrong, I enjoyed my time in Provo and I love the views of the Wasatch Mountains, but let's be honest, it's not the beaches of the Pacific. I'm jealous.

It's funny how as students, many of us complained about the rising costs of tuition, rent, gas, etc. while attending school. Had I taken this little journey a few years ago, I'd have never mumbled a word about the cost of ANYTHING in Provo...I had no clue just how easy I had it when it came to financing my Dixie/BYU education! One day when I send my kids off to college, I assume they'll be going to BYU. However, if by some strange twist of fate they decide to go out of state, you can be sure I'll be hoping it's because they chose to go to Pepperdine. Like I mentioned earlier, would you rather visit your child in Rexburg, Laramie or Malibu? Wait, let me rephrase that: I'll be hoping they go to Pepperdine as long as it's because they got a full ride scholarship. Because at $38,000 a year for undergrad tuition, plus $21,000 per 11 month lease in student housing, yours truly won't be sending any offspring to Pepperdine until I've successfully robbed a Zion's Bank or six.

Sorry for the non-basketball related rambling, but for anyone who's ever been to the campus on the cliff, you'll agree it's worthy of a few paragraphs. Anytime your school's mailing address ends in "Pacific Coast Highway," you know you're doing okay. Before the game, we stopped at Duke's in Malibu for lunch. Fish tacos and crab won-tons always taste better when you're eating them on the beach. We sat outside on the deck and had a great view of the entire coast, complete with a visit from a group of dolphins that were playing just a few meters off the shore. If you're ever in Malibu or Maui, I highly recommend Duke's!

We left lunch and took the short two-minute drive up the hill to campus. Just like at Saint Mary's, Pepperdine's entrance is also gated with a guard posted in the gate house. With the trees, flowers and water fountains lining the drive up to Firestone Fieldhouse, it felt like we were heading into a resort. But once inside, it was just like any other WCC gymnasium. Why, with all the cash they're raking in for tuition, don't they invest any of that into their athletic facilities? There was a small foyer at the entrance with a table set up on one side to sell T-Shirts and hats, and a 10-foot counter on the other side that served as a concession stand. The court itself had no seating behind the baskets and about 25 total rows on the sides. The bottom 12 rows were wooden bleachers; the upper rows were plastic seats. 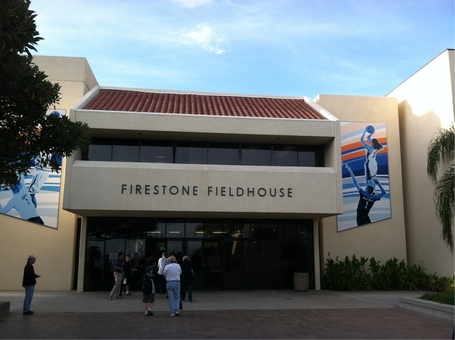 We walked into the gym about 40 minutes before tip. Since I'm usually too busy exploring campuses or gyms, I don't get to listen to KSL's pre-game show when not in Provo. Luckily, our tickets are usually in a great spot near the floor, so most games we get a pre-game and halftime visit from Greg, who always shares his insights and info with us. It's like our own personal pre-game and halftime show.

The game itself was full of ups and downs--I mean that in reference to the flow of the game and also my physical state. I can't remember a game that I've jumped up then immediately sat down so many times. My instincts would kick in on certain plays, I'd jump up to yell at a ref or applaud a play, then I'd remember that President and Mrs. Samuelson were directly behind me, so I'd hurry and sit down. Finally, during the under-eight media timeout, I turned to apologize to them for making a better door than a window. President S. replied that he was thankful we were so spirited because it was allowing him to save his voice. Mrs. S. laughed and said she was glad we were in front of her, because had we been behind her, she'd probably be deaf by then. They were good sports and we had some good laughs. It's always nice when I have patient people around me, I tend to get pretty intense once the ball is tipped.

Unfortunately for those watching on TV, a few Pepperdine co-eds didn't seem to care that BYU brass was in the house. The infamous screeching girl that many were tweeting about (she was sitting right behind the broadcast mics) drove everyone nuts. For those that weren't blessed with the opportunity to hear her blissful tone, think of fingernails on chalkboard for two hours.

After the game we hung around for quite awhile while players and coaches talked with friends and family who had traveled to the game. We even got to steal some cookies from the batch Brock Zylstra's mom had made for him to take on the plane (thanks Mrs. Z!). It's always fun after games to watch little kids from the local area take pictures and get autographs with players they usually only see on TV. Seeing how excited they get made always makes me realize just how much I take living so close to BYU for granted. Most of the fans we meet on the road only see BYU play one or two times a year, heck, there's times I see more games than that in one week! 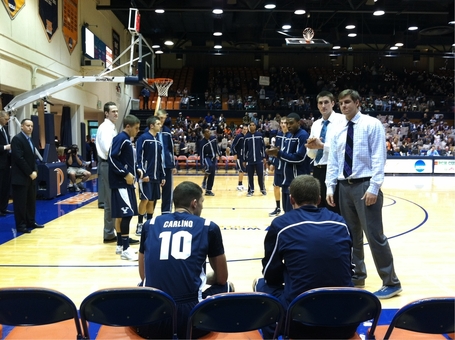 Who was the salesman that was able to sell Pepperdine a couple T-Shirt cannons? He was either a con artist or has sold his soul to the devil. You've all seen those CO2 cannons hit the rafters in the Marriott Center and the top rows of LES, so imagine what they can do in the 25-row Firestone Fieldhouse. Looking away during marketing promotions could be bad for your health. Your free T-Shirt may be ruined from the bloody nose you get catching it.

Next, I was impressed by the amount of national championships Pepperdine has (volleyball (5), tennis, golf, water polo, baseball). They obviously grew up as very dedicated country-club members.

I had a quick chat after the game with a guy who was interested in why I chose to make the trip to Malibu. He seemed like the nicest used-car salesman I'd ever met. Turns out it was Jamie Zaninovich, the WCC Commissioner. Oops.

Last on my random thoughts is Pepperdine's mascot, Willie the Wave. I can't decide if he's cool or totally scary. Somehow when I think of a wave, I don't think of big blue pieces of broccoli with shades, flip-flops and a hula shirt. Weird. 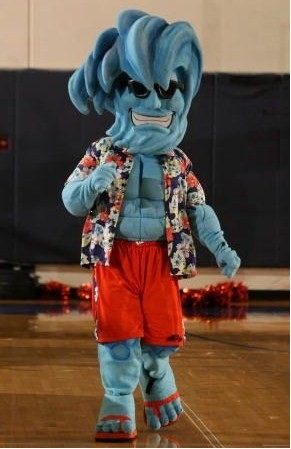 Game's Over, Now What?

Per usual we didn't have a hotel reservation when we got to Malibu because that's just how I roll. Eventually we got a room and fittingly it had an amazing ocean view. Unfortunately since we checked in at 9 and left before sunrise, we never got to see that amazing view. Sometimes we have two people, occasionally three, and this time we ended up with four to share the room. When you're not going to bed until 1, and have to get up at 6, why waste the cash on multiple rooms? Instead we just ordered a roll away before we left for dinner.

We walked a few blocks over to the Santa Monica Promenade and Pier. It's a great atmosphere with lots of lights, street performers and great shops. We even ran into Johnny Depp at one point! I gotta admit, his hair is just as bad in person as it is on screen. You make millions dude, take a shower and get a haircut.

After a few hours when we got back from dinner, we hid roll away #1 outside on the patio and had roll away #2 delivered. Usually we'd just have someone sleep on the floor, but with as much floor space as we had, why waste it?

How We Getting Home?

Once we finally settled in for the night, just to be safe I got online to check how full our flight home was the next morning. Cougar Roadies, we have a problem. What once was a fairly open flight from LAX to SLC, now was oversold by 10 -- thanks for nothin' Sundance. So I semi-panicked and started scrambling for a new route home. Long Beach? Oversold. Anaheim? Oversold. Burbank? Oversold. Ontario? Oversold. I'm sensing a pattern here and it's not a good one. After about eight alternate cities, I found the winner: LAX-SAN-SLC.

We left the hotel just after 6 AM and caught a flight to San Diego at 8. The plan was to leave San Diego at 10 and be home by 1. Unfortunately between the time we left L.A. and the time we got to San Diego, those flights filled up too. Long story short, we sat in the San Diego airport from 9 until 4:40...ugh. There are airports that were built for long layovers; they have lots of shops, good food options and things to do. If you ever plan on getting stuck in an airport, San Diego isn't one of the chosen few.

By the time we finally boarded a flight home, I was pretty excited to get out of the 70 degree weather in San Diego. That excitement lasted until I stepped off the plane and was slapped with 20 degrees in Salt Lake, talk about a rude awakening. In the end it took us just over 14 hours to get home, we could've driven home faster. Oh well, as I've said before, it wouldn't be a Cougar Trip if everything went smoothly. Though the transit wasn't the best, the weekend as a whole was amazing. If there's one campus in the west that everyone needs to visit, it's definitely Pepperdine. The game atmosphere itself wasn't even in my top 20, but everything else that comes with being in Malibu and Santa Monica gives Pepperdine high marks in my book.

That's it for now. See you in Portland.