BYU commit Tanner Mangum, fresh off his Elite 11 MVP performance, saw significant action in the 2012 Under Armour High School All-American Game on Thursday night. The game was broadcast live on ESPN. Mangum, who has burst on the recruiting scene during the 2011 campaign, didn't have a game to remember; at least statistically. Mangum tossed three interception, two of which were deflections off of the hands of his intended receivers. The Idaho native did show great poise in the pocket and the ability to make key throws with a rush in his face. I could tell he was little nervous and was trying to do a little too much. As @MacDiego pointed on Twitter, this is a good thing and will hopefully cause Mangum to work harder to prepare for Division 1 football. In other words, not becoming a diva (See Heaps, Jacob B.)

A couple of cool moments after the jump... 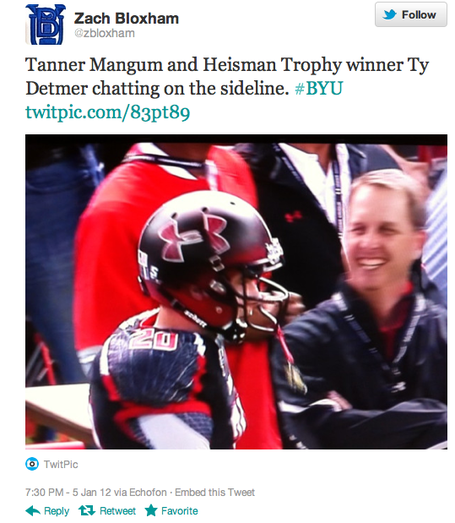 Because of an injury, Mangum was asked to switch teams at halftime. ESPN National Recruiting Expert Tom Luginbill noticed how well Mangum handled the change

Can't wait to see you in a BYU uniform, Tanner.