BYU in the NFL: Will Collie bounce back?

Will Collie bounce back to play again in the NFL? What is Dallas Reynolds future in Philly?

Share All sharing options for: BYU in the NFL: Will Collie bounce back?

Austin Collie underwent surgery for his ruptured patella last week. He has remained positive and focused via twitter over the past week and half. 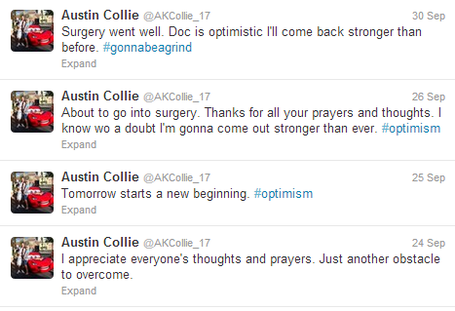 Rehab from this type of injury requires a very focused type of dedication and work ethic. Those are both qualities that Austin is known for taking to the extreme. He should be able to return from the knee injury bynext season. The larger and looming question is his ability to overcome a string of concussions. Continued concern in Indy over Collie's long term health and his contract expiration at the end of this season may lead to the end of his days as a Colt. He has no apparent concern over the concussions he has suffered and expects to make a return to the NFL. An opportunity to find a team with a more experienced quarterback behind a better O-Line may do him some good.

Dallas Reynolds got the start again for the Eagles at center. Similar to last week he seemed a little jumpy during their first couple of drives and settled down as the game went on. The Eagles are still playing without two of their starting offensive linemen. This fractured offensive line did not give up a single sack to one of the best defensive lines in the league. While the long term future of the back up center is unclear, he seems to be fitting in just fine for the time being.

Dennis Pitta was blanked this week against the Cleveland Browns. After having at least five catches in each of the Ravens first three games, Pitta recorded no stats in the Thursday night affair. He only had two targets as Baltimore focused in on attacking the Brown's corners. This type of drop in production is not a surprise in an offense that has featured a different receiver every week. At this point in the season Pitta has seen 32 passes thrown his way while making 18 catches for 188 yards and 2 TDs. There is every indication that he will continue to be one of Flacco's key weapons.

Vic So’oto signed a contract with the Oakland Raiders last Tuesday. So'oto was released from the Green Bay Packers after suffering an ankle injury in August. So'oto took the roster spot of Carl Ihenacho.

Brett Keisel and the Steelers were on a bye this week. John Beck (Houston Texans) did not see meaningful time. John Denney is still the long snapper for the Dolphins.

After not playing in a game since 2010, Ray Feinga was waived by the Miami Dolphins this week. His future is uncertain.