Traveling man Presten gives part one of his trip to Atlanta for BYU-Georgia Tech, including meeting a loyal VTF reader on campus.

What a great weekend in Atlanta. The weather was amazing, the attractions were fun, the hospitality was great and the game was a whole new experience for me. The game was such a great experience that I'm going to break this post up into two parts. The first will encompass everything that I did while in Atlanta, the second will focus solely on my experiences in the booth with Greg Wrubell and the KSL Radio team. I had my first ever press pass...and loved it!

Getting to Atlanta was fairly smooth but far from flawless. I took the risk of attempting to get on the Thursday night red eye that actually departs at 12:55 am Friday morning. As my luck would have it, I was the first standby left off the flight, grr. So by the time I got back on the shuttle, through the snow and back home, it was almost 2 am. The time wouldn't have been a big deal except that I had to be back at the airport at 6:15 am for the next departure at 7 am Friday morning. Thankfully all went smoothly, and I made it to Atlanta just after 1 pm Friday afternoon.

Because it was barely 30* in SLC when I got to the airport that morning, I got a little bit of climate shock when I stepped off the plane at Hartsfield Jackson Int'l, because the thermometer was touching 80! Usually I'm one to complain all day about humidity, but on this trip it was a welcomed change from the early-season snow in SLC.

Now came the only risky part of my trip. When I got into the terminal it was 1:23 pm. My first scheduled stop was a ballpark tour at Turner Field (I'm a lifetime Braves fan), but the last tour started at 2:00. Great, I've got 40 minutes, I think I can make that work... but wait, I don't have a car yet. Because I'm never sure what flights I'll get on, I NEVER make car reservations before I land and I usually wait on hotels, too.

Plus, as some of you savvy travelers know, Priceline deals are always best on day-of purchases. So as I weaved in and out of airport traffic en-route to the Rental Car shuttle train, I was on my phone placing my bid. What did we all do before mobile apps? I got a smokin' deal on a car about 2 minutes before the tram pulled into the rental center...perfect timing!

Turner Field: Home of the Braves

I hit the freeway and made great time getting to The Ted. I pulled in with at least two minutes to spare before the last tour departed. I've been to numerous games at Turner Field, but I've never actually taken the official tour. Through my travels I've became a fan of touring ballparks because you get to see areas you'd never see any other way. The tour at Turner starts in the Braves Museum ... 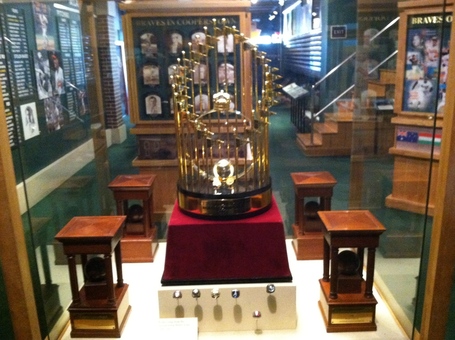 ... and then proceeds to the Skyfield, Media booth, TV Broadcasting booth, Luxury suites in the 755 club--named after Hank Aaron's MLB HR Record total (Without an asterisk, I don't count Bonds' record), the VIP suites, the Braves' Clubhouse and the dugout. 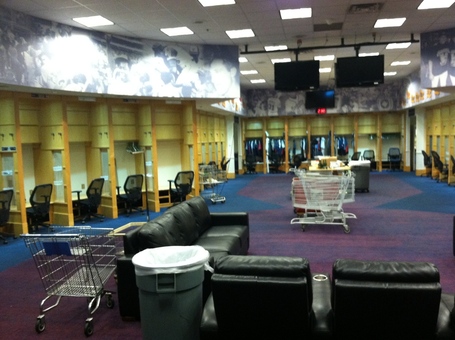 Overall it's a great tour and provided more information and access than any other tour I've taken. I even got a few free media guides for coming up with the best two-word headline to describe the 2012 season: "Infield Fly". For you non-Braves fans, skip to the next paragraph, for those who care I'll spill a few fun facts:

- The site of the old Fulton County Stadium is still memorialized in brick out in the current parking lot and the spot where Hank Aaron's 755th HR landed has a memorial still standing.

- The seats directly behind home plate and private club access are $25K per season, minimum TWO seats for THREE seasons, so prepare to drop $150K the day you sign up.

- 755 Club membership is an extra $500 per season for season ticket holders.

- Chipper Jones received gifts from all teams on his retirement tour last season; his gift from the Braves will be his full clubhouse locker. It will be removed this month and installed in his home "man-cave". 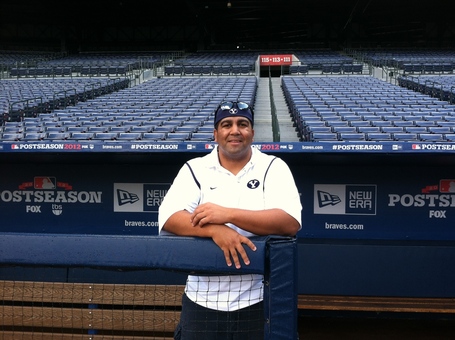 Just a few miles away from Turner Field is CNN's world HQ and also the Olympic Park. CNN Center houses all of the CNN networks (CNN, Turner, Cartoon Network, CNN Radio, etc.). You can tour the facility during the day and even during live filming hours. The main floor has a variety of restaurants and shops and an open atrium with views into the CNN studios. For lack of a better description, it's basically designed like an Embassy Suites with a very open feel inside. 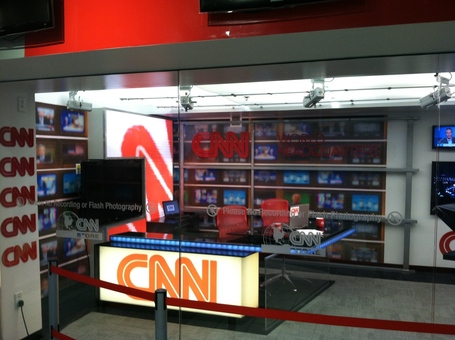 Across the street from CNN is Centennial Park, which was the central hub of the 1996 Atlanta Olympics and sight of the attempted bombing. Currently the site still has an active splash pad for kids in the shape of the Olympic rings and other memorial plaques placed throughout. 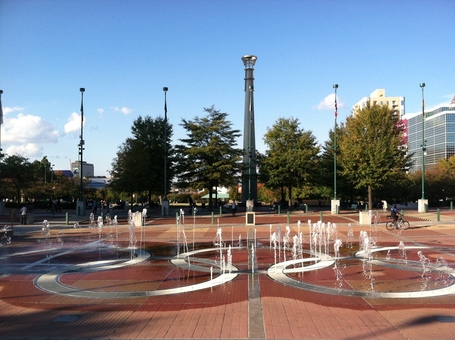 I spent the remainder of Friday roaming around on campus at GT. It was kind of a trip down memory lane for me as I'd made multiple trips to Tech back in 2000-2001 as one of my best friends was a member of the GT Golf team. I made my obligatory trip to the bookstore, which is a bit fancier than most campuses. You know your campus is high-end when your bookstore is run by Barnes and Noble! 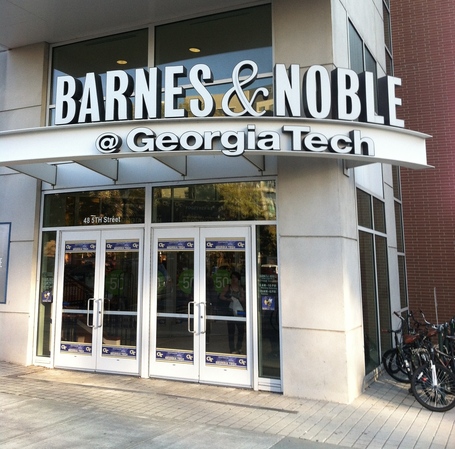 I also walked around Tech Tower, the athletic facilities, the dorms (former Olympic Village) and intramural facilities. The Tech campus is a bit cramped together due to its downtown location, but the buildings are very upscale and tasteful.

While walking around Tech Tower, a GT student saw my BYU shirt and greeted me with a "Go Cougs" while passing. I said the same in passing, but then we both stopped. He looked back and said "Hey, wait a second, aren't you that guy from Vanquish The Foe?" It was a first for me, and a cool one.

I told him he was correct and we chatted for a bit. He told me VTF is one of the ways he follows BYU while living in Atlanta. It was a cool moment for me, nearly 3,000 miles away from home, to have someone on the street stop me because they recognized me from my OTR posts. My only regret is that because I was so caught off guard, I didn't think to take a picture with him to use in this post. Heck, I didn't even get his name...#FAIL. (If my new friend from GT is reading this, please comment below and I'll add your name into this post.)

It was one of the coolest moments I've had since I started blogging about my BYU experiences because it really hit home that people out there are paying attention and you never know who's reading a post. Hopefully others will continue to do the same and I can continue to meet many more of you as I travel closer to your hometowns.

I've met quite a few people I interact with on Twitter, but this was the first BYU fan that "met" me through my blog posts. So going forward, if any of you see me walking about in Salt Lake City, Provo, or any other random town my travels take me, please, stop me and say hello! I promise next time I'll be more alert and actually get your name and probably a picture that may possibly end up in the post for that trip. 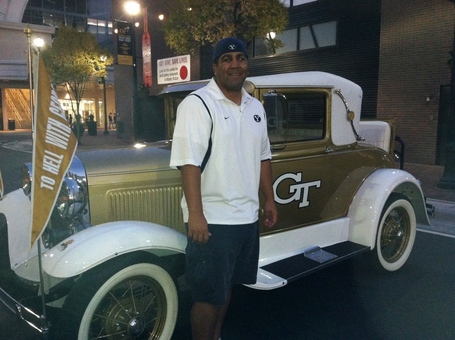 Because I'd toured through campus and done most of my sight seeing on Friday, I had some extra time Saturday morning to kill before heading to the stadium. I stopped for breakfast at Waffle House (Required stop in any city that has one), then decided to take a historical detour.

I spent a while at the Martin Luther King Jr. Memorial in downtown Atlanta. I'd been to the birthplace home many years ago, but the actual memorial site didn't exist back then. The museum has a 5-6 display areas that each depict a different part of MLK Jr.'s life and work. Each one has photos, quotes and paper clippings from the time. Most also have a video playing that talks about that era and many included actual footage recorded during speeches or movements. 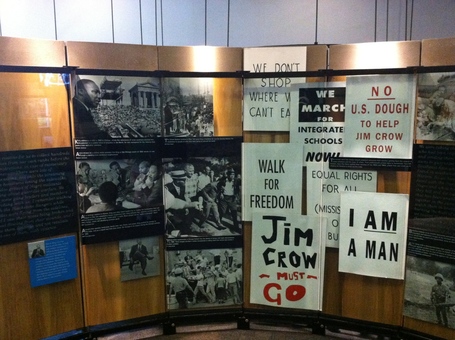 Across the street from the museum is the final resting place of MLK Jr. and his wife, Coretta Scott King. The tomb is on an island in the middle of a large reflecting pool. Just in front of the tomb is an eternal flame with a message: "The eternal flame symbolizes the continuing effort to realize Dr. King's ideals for the ‘Beloved Community' which requires lasting commitment that cannot weaken when faced with obstacles." 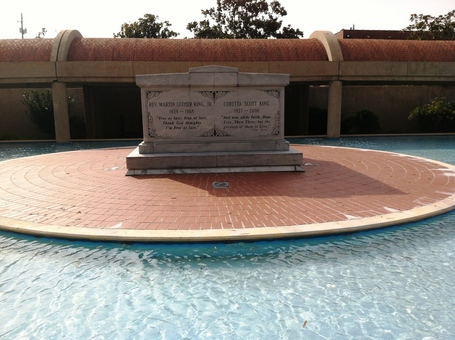 Just a few hundred yards farther up the street is the home where Dr. King was born. Tours are available of the home and are free to any guests. I've been to quite a few National Park Service run museums and memorials, overall the MLK museum isn't one of their best. However, it does have some interesting information and a much greater historical significance than others. The MLK site represents arguably one of the most influential movements in the history of our nation and as such, deserves much respect. If you're ever in Atlanta, I'd recommend a visit if for nothing more than to pay your respects to a man that helped shape the culture of America for the better. A tip o' the cap to you Dr. King 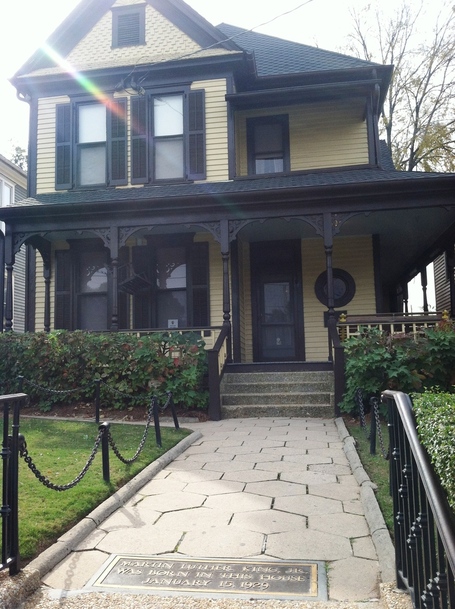 My original plan was to attempt to fly directly back to SLC from ATL. However, those of you who have ever been in Hartsfield-Jackson Int'l know that it's not the kindest of venues for standby travelers. In fact, it holds the record for the longest Cougar Trips layover when Bryce and Chris were stuck there for nearly THREE days when we tried to get home from Florida State. Sorry guys.

With that trip permanently burned into my memory, I pulled an audible around 2 AM from my hotel room and re-routed myself through Memphis. The bad part was it meant I had to be at the airport before 6 am, but the decision paid dividends because I flew first class to Memphis, then got an exit row with ample foot room from there to SLC. I landed back in Utah just after 11 am, which was a new record for me on a football trip. Definitely beat my backup plan of ATL-DTW-MSP-SLC had I not got on the initial flight out of Atlanta.

Overall I had a good time in the durrty south. Unfortunately GT backed out of the last two games in the series so we don't have anything scheduled there for awhile. Maybe we'll get lucky and find a way to get Georgia on the schedule next? I definitely wouldn't mind taking in a game "between the hedges" in Athens! Ok, it's a long shot...but a kid can dream can't he?

That's it for my ATL travelogue. Be sure to catch part two as I document my experiences sitting in the booth with Greg Wrubell, Mark Lyons and the rest of the KSL Radio team.