Does BYU football have a ceiling?

Dammed by Peculiarity and the BCS 2.0?

Share All sharing options for: Does BYU football have a ceiling?

Being a fan of Brigham Young University football is a unique, beautiful, and maddening experience. The uniqueness stems from the nature of the university and the purpose it strives to fulfill with the football program; the beauty from the forward pass made famous by BYU quarterbacks (2012 not included); and the madness from knowing your favorite squad may very well have a ceiling.

Being owned by the Church of Jesus Christ of Latter-day Saints, this combination of faith and football can lead to a beautiful fusion of two of the most influential sections of an LDS person's lifestyle. Despite what many detractors opine, BYU strives to do things the right way: winning football games without sacrificing the moral values of the university and church it represents. This desire to win football games in a moral way is not a manner of self-gratification or self-elevation, but one of genuine consciousness.

The purpose of college football is to win a national championship. Before BYU kicks off in September, there is only so far it can climb. The use of pre-season polling, big conference bias, and a system wholly designed to keep the little guys of college football outside of the title game continues year after year. This is a point I strive to make with my friends who follow BCS schools. How depressing would it be to know that your team has been eliminated from national title contention before it ever took a snap?

Sure, BYU won the national title in 1984, but that scenario would be a fantasy under the current set-up. The current BCS system was created in large measure to prevent a sequel to 1984 BYU from ever transpiring again. BCS 2.0, while some things are still unknown, will presumably be no different. Seeing that BYU has failed to qualify for a single BCS game let alone the BCS Championship, I understand the argument that we must crawl before we can walk. All I am trying to ask is a simple question: Does BYU football have a ceiling beyond that created by the BCS system?

Because of demographics, recruiting, and other factors, is BYU destined to forever be stuck between being 'not-quite elite' and 'never terrible?'

Further, will the BCS 2.0 change things? Would a 12-0 BYU team qualify for a chance at a title? More on point, would an 11-1 BYU team qualify for spot in a BCS game at all? Dr. Nick, one of my favorite commenters here at VTF, posted this in response to that very question: 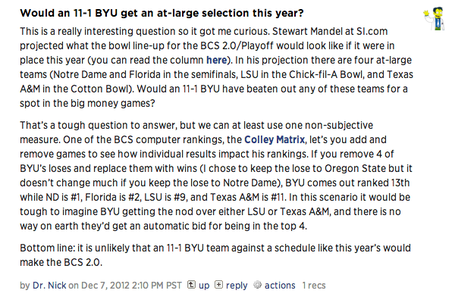 In the end, it comes down to a matter of perspective. Would I be happy and content cheering for BYU football if I knew that 10-2 or 11-1 was simply as good as it was going to get? Absolutely. As a member of the LDS Church, I want BYU football to represent the standards. If that means I will never see BYU in a BCS Bowl Game, so be it.

But, what if Bronco Mendenhall is correct? What if, as he states, there is much more success to squeeze out of this program? Is it a pipe dream to see a BYU football team doing it the right way and be rewarded with a chance at a championship? Or even a berth in a BCS Game? Only time will tell.

I have always assumed that BYU has a ceiling on what it can accomplish. I am okay with this. I also hope I am wrong. What say you?

Post-Script: I am not advocating BYU move away from the honor code or strive to accomplish success through differing means. I am not. This is simply a question of whether there is a limit to what BYU football can do in the modern BCS era.