I Wear BYU Apparel, I am a Mormon

Wearing your religion on your sleeves, I see?

Share All sharing options for: I Wear BYU Apparel, I am a Mormon

Did you know that Brigham Young University is owned and operated by The Church of Jesus Christ of Latter-Day Saints? Crazy, I know. One thing I have realized while living outside Mormon-centric Utah is that when those unaffiliated with the Church see someone wearing BYU apparel, the assumption is that said person is a Mormon. And, considering the nearly uniform nature of BYU fan demographics, who can blame them. Just 3% of non-Mormons in the state of Utah support BYU. And outside of the state, that number would be even lower. So, if you wear BYU gear, you are a Mormon.

Is it the same with other religious schools? When you see a person wearing a TCU shirt, do you assume they are a Disciple of Christ? How bout a dude wearing a Tulsa hoodie? Is he a Presbyterian? And you know when you see a Cameron Crazy on television, the first thing that comes to mind is United Methodism.

Sure, there are many Catholic institutions throughout the country. Notre Dame, Gonzaga, Boston College, et al. But the Catholic Church is headquarted on another continent, and these institutions are not as thoroughly synonymous with the Church as whole. For one thing, the Vatican does not own any of these schools. Same goes for Protestant institutions such as Baylor and Pepperdine. All of these non-Mormon, religiously affiliated institutions are sufficiently compartmentized as to not be directly tied to any single source. BYU is owned and operated by the Mormon Church.

Wearing BYU gear is akin to wearing a white shirt and tie if you are among non-BYU fans. This is not a bad thing. Just another reason why being a BYU goes far beyond being a fan of Illinois, Clemson, Arizona, or any other secular school. Baggage is not always a bad thing. And sometimes, baggage can be confused with responsibility. This does not make BYU fans better, just different. Then again, you already knew that.

Take this picture, for example: 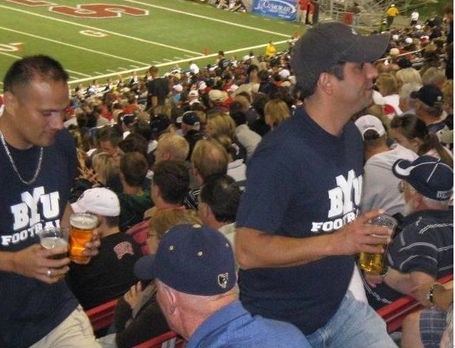 What would cause someone to take this photo? When an institution and a religion are so intertwined, it is impossible to escape the seeing eye of the ‘assumptionist' public. This is especially true when the BYU fan is either not a Mormon, or not presently affiliated with the Church. For the rest, wearing BYU gear is about the easiest way to announce your Mormonism to the rest of the world.