Who will start at QB for BYU in the Poinsettia Bowl?

This is the way the QB controversy ends: Not with a bang but a whimper?

Share All sharing options for: Who will start at QB for BYU in the Poinsettia Bowl?

With just days until BYU's rendezvous with old not-so-rival San Diego State in the Poinsettia Bowl, let us turn our attention to America's favorite national pastime: The Quarterback Quandary at Brigham Young University! /throws up - Who will start in BYU's final contest of the season? Is Riley fully healthy? Would Bronco contemplate starting James Lark even if Riley were not hampered by injury? 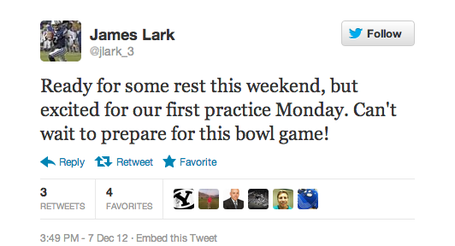 No one questions Lark's ability to prepare, even if he will never see the field. Beyond that, is James Lark hinting at the possibility of starting the bowl game? Or is this just more evidence of the commendable nature of Lark's character?

Vegas odds (my odds) predict that, unless something exceptional transpires, Riley will be the starter.

I attached a poll below asking who will start for BYU in San Diego.