One of my favorite commits from BYU's 2012 class is linebacker Butch Pau'u from Anaheim, California. Bio/highlights below the jump...

At 6-0 and 220 pounds, Pau'u was an all-state linebacker in California at Servite High. A lot of recruit talk has focused on Tanner Mangum and Troy Hinds, but this three-star recruit is a guy who could be awesome for Bronco's defense. Brandon Huffman, a recruiting manager at Scout.com, said

I'll say on record right now: Butch Pauu ... pound-for-pound there's not a better linebacker in the west. Not a better one. And he'll get overlooked because of his size and then go out and become a stud... - Brandon Huffman

Brandon Gurney, recruiting guru for the Deseret News, held a live chat this evening. I asked him to corroborate Huffman's claim, and this was his insight: 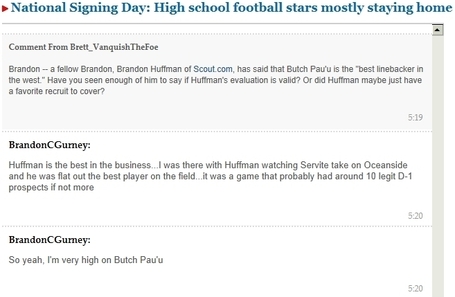 Pau'u is set to play one year at BYU before serving an LDS mission, and was also recruited by Washington, Nebraska, Iowa State, Colorado, and Oregon State.

(Spotlight video the LA Times did of Pau'u)