On The Road: Grief at Gonzaga

Share All sharing options for: On The Road: Grief at Gonzaga

Last Wednesday night, I maybe got two good hours of sleep because I was so excited and anxious to get to Gonzaga on Thursday. I seriously was like a little kid on Christmas Eve; I tossed and turned all night because I was so giddy. Thursday had been circled on my calendar since the day BYU's WCC schedule first game out. I always look forward to getting out of town for games, but I was more excited than usual this week. It had been five years since I last was at GU and I was excited to return to the atmosphere, intensity and the battle that was about to take place in The Kennel.

Thursday night, I couldn't sleep at all. Damn Bulldogs.

We got to Spokane around 5:00 on Thursday. While I was still at the airport I had some great conversations with local Zag fans. One of my favorite parts of traveling is meeting fans who are just as passionate about their team as I am about BYU. It's funny how being decked out in BYU gear is always a magnet for opposing fans; never a shortage of locals in enemy territory who have something to say about BYU and for the most part it's usually a good experience. UNLV, SDSU and UNM fans, well, I'll just say that they're a different breed and leave it at that.

On my way out of the airport I also was notified that I had 6-8 extra tickets at my disposal to ensure we had as many BYU fans as possible in the house. With just a few quick phone calls I had some very happy friends willing to drop everything and head for campus. To most, a ticket to a GU game may not seem like a big deal, but in Spokane it's HUGE because Gonzaga basketball is considered a permanent sell-out. Tickets aren't sold to the general public so only season ticket holders and students get in. With just 6,000 seats in The Kennel, demand is far greater than the supply. Since the season-ticket waiting list is around five-years long, about the only way you were getting into this game was dropping upwards of $200 with scalpers or stub-hub. Most WCC venues have gouged Cougar fans all season with doubled ticket prices, but at least at those venues the ticket office was even an option! 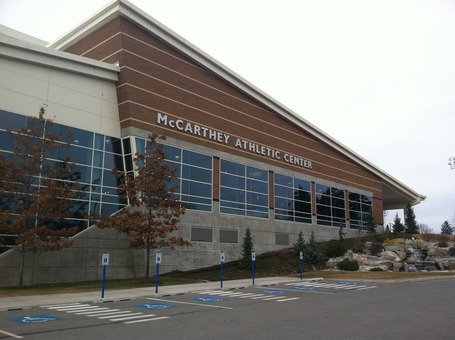 We got to the arena about an hour before tip. The McCarthey Athletic Center is one of the nicest venues in the WCC. Actually, it's probably a top-5 college arena west of the Mississippi. It's got an open feel to it with wide outside concourses and many GU display cases. The entire arena has chair seats (no bleachers) and multiple LED video screens inside. It's also the only WCC venue that has suites. They aren't Thomas & Mack quality, but they're suites none the less. As you can assume, due to the smaller size, there's not a bad seat in the house. Our BYU allotment was up higher than usual, but even then, our seats would have still been in the lower portion of the Marriott Center. 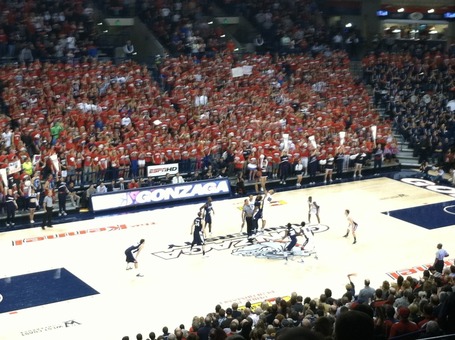 I have to admit the atmosphere wasn't near as loud as I'd expected it to be, with the exception of the Elias Harris alley-oop late in the game. That dunk brought down the house and rightfully so, it was impressive (ESPN's #4 play-of-the-day). The students were on their A-game and definitely represented well, but the general crowd was quieter than I remembered it being years back. The Kennel didn't hold a candle to a sold-out Marriott Center crowd. I'd rank it behind Viejas, T&M and The Pit. Each of those arenas were much louder than The Kennel.

The game itself was quite frustrating. If you look at the box score alone, you'd think there was no way BYU had lost. Heck, we missed more shots than GU even attempted! In the first 13 minutes of the second half, the Zags didn't hit a single field goal, they only scored seven points in that stretch, all free throws. I'm not one to second guess scenarios, but I have a hunch a healthy Noah Hartsock would've made quite a difference. Oh well, we can coulda-woulda-shoulda all night long, but ... BYU still lost. One day I'll learn not to do that to myself, but until that day, I'll keep suffering sleepless nights in hotels. Ugh.

Friday I tried to make the best of the day, which is easier said than done in Spokane. Most road trips I take, I find myself wishing I had another day or two to see some more sights or explore the city a bit more. But the phrase "most road trips" definitely doesn't encompass Spokane. If it weren't for getting to catch up with some old friends who currently live in town, this trip may have been a complete bust. I know there are a few weeks left before I compile my "Best Of" list and rank each trip this season, but spoiler alert: Spokane's ranking is rather firmly set at the bottom. [Disclaimer: if we get into the dance and are seeded in Albuquerque, I reserve the right to replace my current doormat. ABQ is my least favorite city in America (Runners Up: Emery, UT; Syracuse, NY)]

I shouldn't be so harsh on Spokane, but unfortunately the WCC deck is rather stacked. When previous trips included time on the beach in Malibu (Pepperdine), Fisherman's Warf and Ghiradelli Square in San Francisco (SMC), shopping at Nike HQ (Portland) and spending time at Pebble Beach (Santa Clara), the bar was set waaay above anything Spokane had to offer. If I'd have made the trek to Coeur d'Alene for lunch at the resort on the lake, or been able to tee it up at Indian Canyon, I may have enjoyed the day a bit more. But since time and weather didn't permit for either, I improvised with quick stops at a few local spots before catching my afternoon flight home. 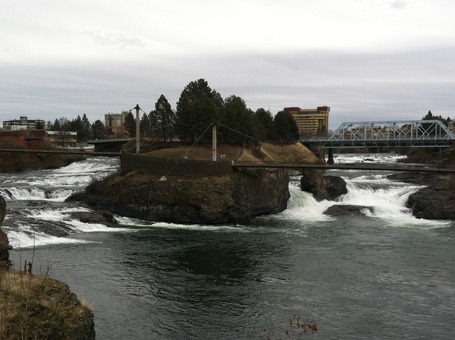 I started out my free time with a walk across the bridge over Spokane Falls. It's a great time of year to see the falls because the water level was quite high. The bridge overlooking the falls definitely has one of the best views in the valley. From the falls I made a quick stop at the GU bookstore to get a magnet for my always growing collection. My last stop near campus was at Jack and Dan's, the landmark sports bar started by John Stockton's father. J&D's is a great little place just across the street from campus, it's a favorite of both Zag students and fans . If you're ever in Spokane, a quick stop at J&D's is a must! 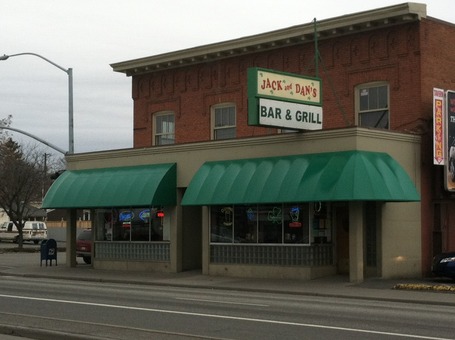 Before I headed back to the airport, I had lunch downtown with our own VTF All-Star Zach Bloxham. As often as we've exchanged thoughts and opinions via Twitter and online, this trip was actually the first time we'd met in person. As expected, the conversation was mainly BYU sports, with some legal and political tidbits mixed in. As much as I enjoy twitter and message boards, nothing is better than face to face conversation.

From lunch it was back to GEG and my flight to SLC. I need to give a special shout out to my "friends" at TSA in Spokane. You folks definitely know how to make someone feel like they're welcome to stay in town awhile...a long while. I'm so glad you had 18 agents on-duty but only one lane open. Considering there wasn't more than 20 people in line, taking 30 minutes to get through security was a relaxing break from the usual three minute blitz. Your extended hospitality made me feel welcome. Considering I didn't make a beep in the scanner, the added bonus of a body pat-down, detailed bag search and extremely slow service were a great way to end my stay. Idiots.

Luckily Delta was in a better mood than TSA and I was given a first-class seat for my flight home. Unfortunately I didn't get to fully enjoy the improved food and beverage service up front, as I passed out just after take-off. Not a big surprise, I had two days of sleep to catch up on.

Hopefully I can rest up over the next few days, because this weekend won't include much sleep, if any. It's time to take the party to Vega$. Let the WCC Tournament begin!