Rarely does a BYU basketball game enter a discussion of Greatest Sports Experience of All-Time. The matchup between SDSU-BYU from last winter is the exception. The Aztecs were undefeated and ranked in the top five. BYU, also in the top ten, was ready to take control of the MWC race. I've been to more than a dozen Utah Jazz playoff games and none of them could match the decibel level of this night at the Marriott Center.

Jimmer went off for 20 points in the first half, finishing with forty-freakin-three. It was a performance immortalized by a classic tweet from Kevin Durant. Now you can relive one of the greatest moments in BYU history as the game has been uploaded to the on-demand section of BYUTV. 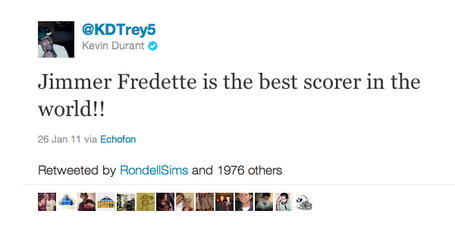 PostScript: Has anyone informed @The__Show of this development?

H/T to @WillWickert for the info