This Game Will Hurt You: An Internet Hug for Mr. Loy & Remembering Why We Love Sport

Share All sharing options for: This Game Will Hurt You: An Internet Hug for Mr. Loy & Remembering Why We Love Sport

Brendan Loy, who some of you might know from his Twitter mastery and semi-famous blog, was dealt a difficult blow yesterday. As a fan and pseudo-beat writer for the Denver Pioneers, Brendan lived and died with each DU contest. After finishing the season as the number three seed in the Sun Belt, the Pioneers were primed for a deep tournament run and a potential NCAA Tournament berth. Top-seed Middle Tennessee State was upset in the Quarterfinal, further paving the way for Mr. Loy's Pios. Brendan purchased a few refundable items (plane ticket to Arkansas, car rental, hotel reservation) in preparation for attending the championship game. See, this is why we love sport. We ever invest our time, energy, money, and hope that one day, one night, or in one moment, we will see something unforgettable. More often than not, however, the unforgettable moment isn't one of joy but disappointment. So it was for Brendan on Monday night.

Inexplicably, like its MTSU brethren earlier in the Tournament, Denver was upset in the Semifinal. Thirty games had led to this point, and now, it was all over. Sure, Denver will play in a postseason tournament, but few kids dream of scoring an upset in the College Basketball Invitational. Thoughts of a trip to remember were shattered forever. (Ironically, when one dream is shattered, another is fulfilled. The balancing economy of sport is one of its finest qualities) Brendan, believing that the moment was going to be a joyous one, captured his reaction to the final seconds of Denver semi. In the end, it was like a Zapruder-film style look at what-might-have-been.

"This Game Will Hurt You."

This moment reminded me of a great essay I read that year from The MidMajority's Kyle Whelliston. Here is the excerpt I had in mind: 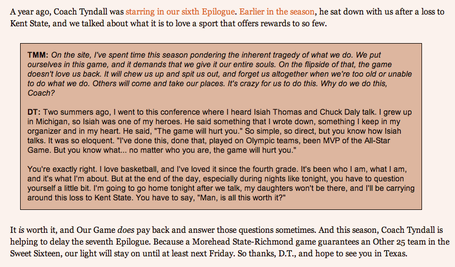 "This Game Will Hurt You."

In the end, It is all worth it. With a week of nail-bitting ahead for BYU fans, let us remember that our outlook on this season shouldn't be derived from what the Selection Committee or ESPN or the Message Boards say about our success. Sure, we wish that BYU was a Tourney lock and potential Final Four squad, but that isn't what makes sport so wonderful. It is the moments throughout the year that bring us joy. That increase our brotherhood with man and bring us ever closer to the school we know and love. These moments compound over time and the connection with the sport and program breed true emotion. And maybe, just maybe, one night in the future, we will see our squad win its last game. But that really isn't the point. It's about the journey. Given Brendan's difficult loss and BYU's NIT probability, would he or we trade the time spent watching if we knew the end result in the beginning? No. And ironically, we already do know the end result: It Ends In A Loss. Still, we dive into each season like it's our last. That, right there, is healthy, faithful fanhood. Let's not forget this during the tsunami of Championship Week. Sit back, relax, and enjoy Our Game. There is nothing like it.