After rampant self-made mockups and rumors spread of BYU wearing radically-designed Pro Combat uniforms from Nike, largely in part to April Fools Day, a new image has emerged via Brian Mace of the Cougar Center podcast. It is this (below the jump): 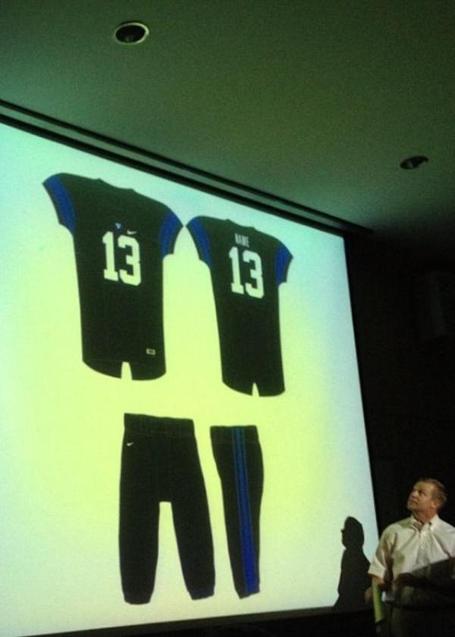 This is either an outrageously-well-done photoshop, or a definite snapshot from a team meeting. (Looking over the pic, it's hard to claim it's been doctored.) You can see the oval-stretch-Y emblem at the crest of the collar.

So I guess that leaves one question: will the helmet be black or white?

Black has slowly made its way back into BYU football since its one-year use in 1998 and disappearance in 1999. Before switching to the nasty, generic kits in 1999 that included tan, BYU switched the blue double helmet stripe into a black double stripe, and inserted a blue stripe in the middle. Last season, coaches began wearing black t-shirts and special black helmet stickers were issued for special teams play.

So it appears this is happening. Reactions?