BYU's opening week opponent, Washington State, held its annual Crimson and Gray Spring Game on Saturday afternoon in Spokane. I took the opportunity to travel the fifteen minutes from campus to take in the festivities. The Cougs made quite the splash this offseason with the home-run hiring of former Texas Tech head man Mike Leach. The pirate-lovin, sailor-speakin football genius is trying to revive a football program which has seen better days. If the Spring Game was any indication, the Cougars will be improved in 2012.

Long known for his offensive prowess, the Leach offense didn't take long to find the endzone. On a 3rd-and-15 in the opening series, quarterback Jeff Tuel found stud receiver Marquess Wilson for an 84-yard touchdown. It was a perfectly thrown ball from the terrific Tuel, who missed nearly all 2011 with an injury. Wilson was not done either, and were his offensive teammates. Washington State has some good skill guys and should be quite competent at moving the ball. Tuel completed his first 15 passes and looked to have a rhythm.

The achilles heel for the Wazzu O will be the play of the offensive line. While the ball is distributed quickly In the Leach pass-happy scheme, protecting the quarterback is a premium for an offense that throws the ball at such a high clip. The Cougar offensive line looked rather shoddy during stretches on Saturday afternoon.

The Wazzu corners look to be the strength of the defense. Otherwise, the defense struggled on Saturday. Washington State lacks size up the middle and speed at linebacker. And despite implementing a 3-4 scheme, the Washington Cougs lack the big bruising defensive lineman that the Provo Cougs have at their disposal. I couldn't help but thinking that BYU's power running game of Alisa-Quesada-Pritchard is going to get a heavy dose in Provo on September 1. All in all, while I think Washington State will be improved and the talent level has been upgraded over the past few years, BYU should be a favorite heading into the opening weekend of the college football.

Side Note: I've had a bit of a man-crush on Mike Leach since his time at Texas Tech, so today's experience was a great personal joy. As the Cougars warmed up prior to scrimmage, Leach was meandering around the field, wearing khaki cargo shorts and sipping a coffee. At 1:00 in the afternoon. It was the most Mike Leach thing ever. Love that guy and look forward to his remaking of the program in Pullman. 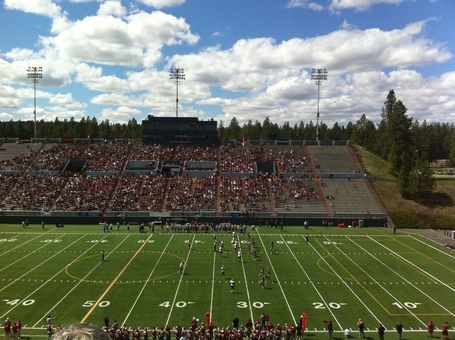