Share All sharing options for: Tailgating Making Strides at BYU

Tailgating is a huge football tradition -- unless you're talking BYU, where tailgating has never been more than a small group or two doing their own thing. But if you haven't heard of the current coordinated movement of @TailgaitingBYU, we're here to help shed some light on the passionate BYU fans who are making it happen. I asked some questions of Brian "Bean" Mace and Michael McQuain, who are part of the group who is meeting up at Rio Tinto on Saturday to cheer on BYU rugby and brainstorm for 2012 football tailgating.

VTF: There isn't much of a tailgating scene at BYU -- which is precisely what you guys are trying to change. What was the inspiration to get this going?

Michael McQuain: Bean, Justin, Mitch and Koti experienced the Grove in person and caught a glimpse of the vision of tailgating and how much it enhances the atmosphere and experience of college football. Other Cougar fans came back from the Grove - and from the Texas game in Austin with similar stories

Bean Mace: Mitch, Justin and myself made a promise to one another to do everything in our power to bring the environment to BYU. I have traveled all over the country for BYU games and have never experienced hospitality like that shown by Ole Miss fans.

Mike: All the credit goes to the CougarCenter guys for getting this started. I am just the "press secretary" -- the old retired fart with nothing but time on his hands.

VTF :There have been some struggles with the university when it comes to where you tailgate. What has been the issue there, and has anything been resolved? What is the planned tailgating location for this season?

Bean: When you do something out of the ordinary at BYU you know you can expect some pushback from the school, mainly the University Police. Initially the concern was the amount of people and oversize vehicles we had in the Marriott Center lot. This lot was spectacular for bringing in visiting fans to our tailgate, which is our main goal. Midway through the season we worked with BYU and moved to the Indoor Practice Facility. While this location severely impacts our ability to host visiting fans, we still manage to bring a few out. As it stands now, we will once again be in the IPF lot this upcoming season.

Mike: We were told -- correctly -- that there is a big parking problem at BYU, especially on gamedays, with no lot dedicated exclusively to tailgating, like there is at Utah and other schools. We were told that at the Marriott Center, where we set-up for the first three home games, that you could have one vehicle in one parking space, with a few chairs and a small grill behind the vehicle, but you could not block the driveway.

The problem with this is that it precludes people bringing RV's and campers, big screen TVs, large grills/BBQs and tents/canopies. After the Utah State game, we had to relocate to the IPF parking lot, where these restrictions were not a problem.

As last season wore-on, we benefited from some incredible media exposure on sportstalk radio, TV, newspapers and ksl.com. This was invaluable as it really seemed to help open-up an official dialog with BYU officials and legitimize our efforts. Since the season ended, BYU has generated a focus group to discuss tailgating and the gameday experience at BYU. We are anxiously waiting to hear if new developments or changes will be implemented for the 2012 season.

VTF: Tell us more about your typical tailgating setup -- food, equipment, anything else -- so that someone who wants to participate for the first time knows what to expect.

Mike: Last year, our 'core group' provided the tents/canopies, chairs, the grills and most of the food. We loved meeting everyone and hosting the fledgling BYU tailgating tradition, but it got pretty expensive for us feeding the masses to be honest. This year, we are encouraging everyone to bring their own gear and food - set up all around us and create a Grove-like tent city where everyone can mix and mingle from tent to tent and sample/share their food so no one person or small group is shouldering the entire expense and cooking duties.

Bean: Last year we showed everyone how to do it, and now it's time for people to leave the nest and show what they've got. Typically we set up canopies over our tables covered in all types of great tailgating foods: hot dogs, burgers, chili, ribs, pulled pork ... the list goes on. I'm really excited to see what kind of setups and food people will be cooking up this fall.

Mike: One thing we really discovered to be an extra perk of tailgating is avoiding gameday traffic headaches. We would start each tailgate about 3-4 hours before kickoff and go until about an hour before gametime. Then, many of us would reconvene at the tailgate site AFTER the game to fire-up the grills, have some leftovers, discuss the game and listen to the post-game show on the radio while the worst of the bumper-to-bumper traffic cleared-out.

Obviously, what I just described is a HUGE time investment which not everyone can or would want to make, but for those who want this kind of total-immersion gameday experience, we say welcome aboard. 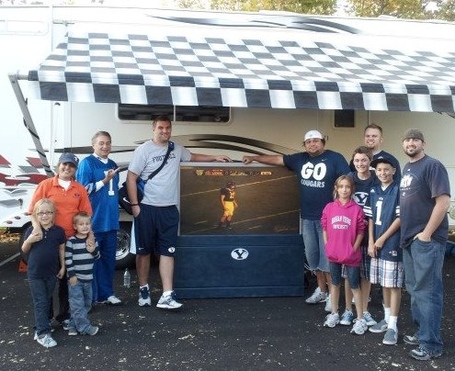 VTF: Many associate tailgating with alcohol and what a typical BYU crowd might call "unsavory behavior." What sets a BYU tailgate apart? Obviously, alcohol is a non-starter on campus, so help allay some of the apprehension that a conventional BYU fan might have about tailgating.

Mike: Demographically, what I saw as we grew last season was the diversity of the tailgaters; we had college students, retirees, alums, singles, families, LDS, non-LDS, BYU fans, visiting fans, and it was GREAT. Everyone felt welcome and expressed how gratifying it was to meet other fans in-person and connect outside of the anonymity of social media and message boards.

Bean: Yes, tailgating has always had an association with drinking alcohol, which is obviously against what 99% of BYU fans believe to be moral. No matter what your stance on drinking is tailgating is what YOU make it. Nobody has a problem with hanging out with friends while having a great BBQ, so why not come out and enjoy yourself.

Mike: Also -- and this is important -- based on the hospitality and kindness shown to members of our group at Ole Miss and Texas, we were determined to 'pay this forward' and make a concerted effort to invite the visiting fanbase to come and join us for what we marketed as "football, fun and friendship." We created facebook event pages for each tailgate and posted them on opposing fan message boards. We contacted the mayors of the towns of each visiting school and formally invited them to be our guests. Three actually came, including Mayor Buddy Dyer of Orlando for the UCF game. He and his party had a great time and told us when we travel to Florida for the return game, he was setting us up with DisneyWorld passes. It was an awesome gesture on his part.

We believe our efforts are 'ambassadorial' on behalf of BYU and CougarNation, and the new friendships and associations are going a long ways to shattering many long-held and negative stereotypes about BYU fans and Provo.

VTF: BYU and ESPN just announced some game times, and we now know 4 of the 6 dates and times. So far, one is Thursday at 8:15 pm, two are on Friday (6:00 and 8:15 pm), and one is Saturday at 1:00 pm. Do the weekday games stick in your craw as tailgaters? What is the gameplan for the Thursday and Friday games?

Bean: As a huge college football fan I love the weekday games, it allows for all-day tailgating and you're free to watch every game come Saturday. We will absolutely be tailgating for weekday games with full force. I am taking days off work to ensure I am there. Typically we tailgate for 6-7 hours before each game, weekday games may impact the length of tailgating for some, but I can assure you, if you make the effort to arrive early you'll have plenty of fellow tailgaters alongside you.

Mike: Many of us will simply plan far ahead and arrange our work or school schedules to accommodate the weeknight games. Unfortunately, not everyone will be in a position to do this, and we understand that, but this is the hand we have been dealt and we will make the best of it.

We adapted well last year to the different gamedays and KO times and had breakfast tailgates as well as more traditional lunch/dinner tailgates. Fans should know that there will ALWAYS be a core group of tailgaters at each home game regardless of the day or time, and that they can come and join with us as their circumstances/schedules permit.

VTF: BYU rugby is playing for the national championship this Saturday at Rio Tinto (Sandy). I saw a lot of the BYU tailgating brain trust is meeting to cheer on the Rugby Cougars. What are the plans?

Bean: Currently there are no plans to tailgate the rugby NC on Saturday, Rio Tinto has placed some restrictions on their lots. But many of our tailgating brethren will be in attendance, we will be discussing ways to improve tailgating and making plans or this fall.

We at VTF will be making our best efforts to support and grow the BYU tailgating scene. If you'd like to meet up with the brain trust at Rio Tinto this Saturday, I'm sure these guys would love to have you. If you're interested in that or have any questions for them about how you can help the movement, here are the appropriate links: