Bill Moos sure didn't seem scared. Washington State's athletic director knew he needed something big and something different, and was sure of his course. It has been 10 years since Mike Price took the Cougars to two Rose Bowls, posted three consecutive 10-win seasons, and then fell from grace. Pullman hasn't seen a winning team since.

If Moos was wanting big and different, Mike Leach is certainly the hire to make. While other schools passed on Leach, who has an open lawsuit against the parties involved in his firing from Texas Tech, Moos swung for the fences. Perhaps the year of evidence he needed (seeing Maryland hire Randy Edsall instead of Leach and then going 2-10) was enough to compel him. Maybe it wasn't that complex, though. While other athletic directors were outthinking themselves, Wazzu simply snatched up the best coach available -- and I couldn't be happier about that. College football is better with Mike Leach coaching.

Leach isn't a worldbeater, but he is a winner. Texas Tech was a picture of mediocrity before hiring Leach (.550 winning percentage, six bowls in 13 years under the previous coach). Leach was 10 for 10 in getting the Red Raiders to bowl games and had a .661 winning percentage. 2008 saw TTU rise to #2 in the polls and flirting with a national-championship-game berth late in the season. Tech went from a six- or seven-game winner to a eight- or nine-game winner each year, and equally as important, people were talking about them. Boosters were interested. Fans believed and were entertained. All things Washington State needs.

If you hear people framing talk about Leach turning Washington State around as if he's some gimmick master, feel free to laugh at, mock, or ignore them. The Air Raid is simplistic sorcery, its origin: BYU. Not only was Mike Leach's football soul stirred while an undergrad at BYU, but he and mentor Hal Mumme made frequent visits to Provo and at some point left with the Cougar playbook in tow. The foundation of the Mumme/Leach offense can thank LaVell Edwards's distinct decision to throw the football in the early ‘70s and his collaboration with Dewey Warren and Doug Scovil to make it happen. This is why leading up to the season opener with BYU, the story almost writes itself.

How quickly can Leach turn things around? No way to know. His first two seasons at Texas Tech ended 7-6 and 7-5 (which at Wazzu would be a turnaround -- again, no winning seasons since 2003). He has the makings of a Graham Harrell-Michael Crabtree duo in Jeff Tuel and Marquess Wilson, but the offensive line and the entire defense remain huge question marks. (Leach wants to score ALL the points anyway.)

Regardless of immediate success, I have a hard time envisioning this not working out for Washington State. The football makes sense, the small-school feel makes sense (Leach is from Cody, Wyoming), and fans are ready for a winner. I'd like to see Leach make them one, too -- just not until August 30th has passed.

|| "Offseason Storylines" examines the biggest pre-season stories from each team on BYU's schedule. Stay tuned for further game previews as the season approaches. 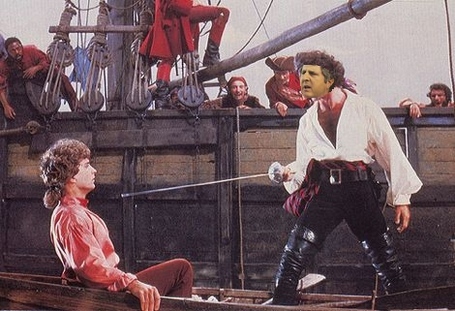 (Hopefully this isn't how the Pirate King treats BYU. Frederick is a BYU-ish character -- clean and sober with a strong sense of duty.)