It's always a good day when bright minds with a passion for sports step into the stats game. This football season, make sure to check out Know Huddle, a new resource for you, the college football fan.

Know Huddle is currently live with stat and ranking breakdowns for the 2011 season. One of the most interesting statistical works is the Correlation stat, which efforts to show which statistical measures correlate most strongly with winning and losing. For instance, it was very interesting to me to see how strongly "pass efficiency differential" and "first downs gained by penalty" correlated with winning among the independent teams.

Know Huddle also has stat reports for every team and conference, as well as a Matchup function where you can see the advanced stats of how teams compare. 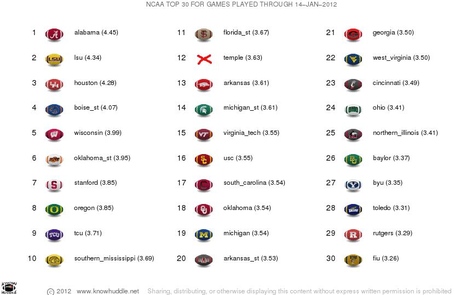 Another great easy reference is the Leaders & Losers sheet, a quick way to see what teams are the best and worst in certain statistical categories. I definitely perused this list looking for fumbles -- I wrote some freelance college football write-ups last season and Army was one of the teams I covered. My eyes told me that Army sure seemed to put the ball on the turf way too much. What did Leaders & Losers tell me? 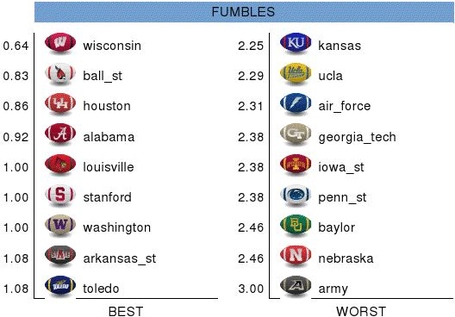 There you have it. Army put the ball on the turf a whopping three times per game, and was easily the worst in the country in ball security.

I'm still getting to know all the features at Know Huddle, having just signed up an account, but it is definitely worth your time. A premium membership is only about $6 for an entire year, an easy payment for such a strong resource. (The only difference between the paid and free membership is having access to the most-recent week's stats during the season.)

The guys behind the site have done a lot of work. So get over to Know Huddle, check out the stats (make sure to check the full reports listed below the previews and explanations), and be informed.