Chris Petersen is in an interesting spot this year at Boise State. Traditionally, a coach and a program are given some wiggle room when they are made to replace a veteran quarterback with a QB with zero starts. But Boise State is different. Chris Petersen had a senior quarterback in 2006 who went 13-0 and won the Fiesta Bowl. He replaced him with a zero-starts senior who went 10-3, then replaced him with a freshman who went 12-1 with a win on the road at Oregon.

That freshman was Kellen Moore, who is now college football's leader in all-time wins for a quarterback. He was 50-3 at Boise State. I'm not sure if one can reflect on that enough, so ... FIFTY and THREE.

So on one hand, it makes perfect sense for critics to say: 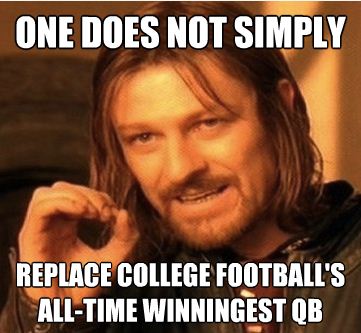 Any program should take a step back after losing such a quarterback. But on the other hand, this is Boise State, where winning is just called "football." This is Chris Petersen, who is 73-6 (!!!) as a head coach. So maybe one *does* just simply replace Kellen Moore?

The man for the job has yet to emerge, and Petersen is giving the quarterbacks plenty of time to battle it out. At Mountain West media days, the MWC media guide listed this at the top of Boise State's depth chart:

While coaches are definitely known for playing depth-chart games as a means of motivation, it appears that Petersen is really waiting for someone to grab hold of the job here.

Joe Southwick is the most experienced of the crew. The junior has the career stats of 40-54 for 400 yards, 2 TD and 1 INT in mop-up time during Boise blowouts. To simplify his game, he's a drop-back passer. He's the presumptive favorite, but if it were clear at all, coaches wouldn't be naming four players as the starting quarterback heading into fall camp.

Grant Hedrick made appearances last year as a freshman as a running option. He ran eight times for 70 yards, while completing 2-3 passes for 19 yards. It remains to be seen if he can pass well enough to win the job. (I honestly couldn't say -- just because he was used as a run threat last year doesn't mean he can't pass, it just means he couldn't pass better than Kellen Moore.)

Jimmy Laughrea is a three-star redshirt freshman. He's 6-2. He plays football. Admittedly, that's all I know about him other than this article with some Chris Petersen quotes.

And then there's Nick Patti, a three-star true freshman. There is a push from a good portion of Boise State fans for the 5-11 Floridian to start. He's got a solid arm, can make plays with his feet, and his stature reminds people of Moore. Kellen did it as a freshman, so why not Patti? They welcome the diversity it would bring to have a Kellen Moore who can run.

If you go with Southwick, that likely means Patti redshirts 2012, gets maybe some spot duty in 2013, and then has three years with the starting job -- if Southwick and Patti are the best talents as presumed. Patti could start with Southwick as a dependable backup if needed, but that would mean getting a true freshman's feet wet under the lights at Michigan State.

So at quarterback, it's transition time again. It seems like a tall task, especially with questions on defense. It's hard to question Petersen's track record when his quarterback "transitions" have given Boise 10-3 and 12-1 seasons, though. I personally don't plan on a game against Boise being any easier than it could have been before -- at least not until we get a look at what the Broncos do in the two games previous to playing BYU.