Kickoff is approaching as BYU prepares to host the Crimson Cougars from Washington. Throughout the season, we will include a "Know The Foe Bio" for each opponent as part of our game-week previews. Here's your bio blast for Washington State: 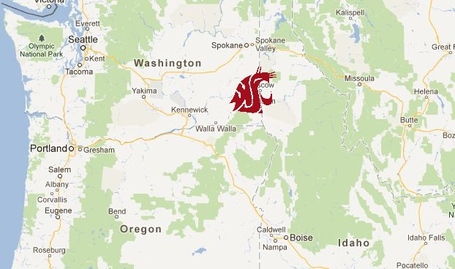 Player-Alumni: Drew Bledsoe (1990-92): Pac-10 Offensive Player of the Year entered draft after his junior year, when he was taken 1st overall by New England. Threw for over 44,000 yards in the NFL and was a four-time Pro-Bowler. Ryan Leaf (1995-97): Heisman finalist led WSU to the Rose Bowl, also skipped his senior season and was drafted 2nd overall in 1998 NFL draft. Widely-regarded as the biggest bust in NFL draft history. Jason Gesser (1999-2002): QB'd Wazzu to the Rose Bowl, currently the offensive coordinator at Idaho.

Watch for tonight's Game Thread, where you can join fellow Cougar fans in discussion throughout the game.

Remember, if you are going to the game, WEAR WHITE!