In the first two games of the 2012 season, Brandon Doman unveiled a wrinkle in the offense made available to him by the emergence of wide receiver Alex Kuresa. In his high school days in Utah, Kuresa was a record-setting quarterback, but he now plays wide receiver.

With backup quarterback James Lark already at the helm, Doman inserted Taysom Hill into the game as a read-option specialist, something we are all growing accustomed to. Lark was split wide on the right of the formation, and Kuresa was on the left side. Three quarterbacks were on the field. Here's a pretty picture: 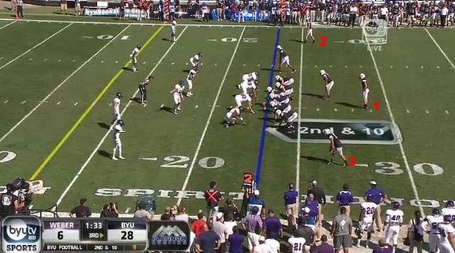 1-Taysom Hill at QB, Stanford commit, current BYU freshman and masher of opponents
2-James Lark, QB, split wide at WR on the far right of the formation. Could also be Riley Nelson, he was just on the bench for the second half.
3-Alex Kuresa, WR, who set Utah state high school records as a quarterback, at the left of the formation

These brings some interesting possibilities to the playbook, as this is something that can easily be done with Riley Nelson in the game instead of Lark. This led me to ask twitter:

Also, taking suggestions for what we call the Taysom-Lark-Kuresa 3headed QB formation. #BYU

Based on your responses, here are the finalists. What should we call the formation?