Share All sharing options for: Dissecting Hits On Riley Nelson

One of my biggest concerns with BYU's 45-13 win over Weber State was how many hits Riley Nelson took. Not only is this an overall concern, but especially against an opponent you are theoretically supposed to be much bigger than. Nothing against Weber State, but when the Wildcats are beating the offensive line, it has to make you worry about what Star Lotulelei and Utah will be able to do.

I've broken down each time Riley Nelson took a hit in the first half against Weber State. The results are discouraging.

(I did not count designed QB runs. Screenshots come from the free video available from BYUtvSports.) 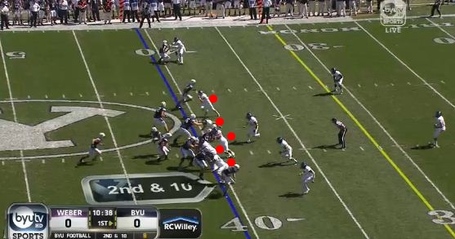 Ryker Mathews does a good job picking up the blitz from the outside backer, but the problem comes when Braden Hansen gets beat one-on-one up the middle: 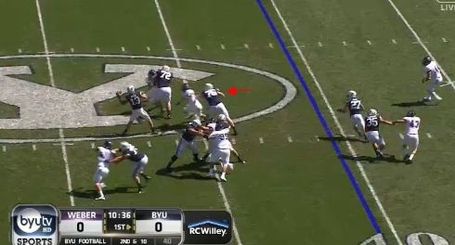 Shame, because the right guard is taking on two DL at once.
Time from snap to hit: 3.16 seconds 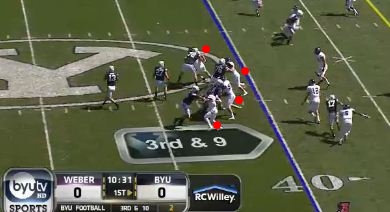 Manageable, right? But Ryker Mathews gets beat one-on-one on the left edge, with blocking back David Foote blocking space. (Not necessarily his fault -- blocking back's first priority is up the middle as tackles push ends to the outside. But certainly no good, anyway.) 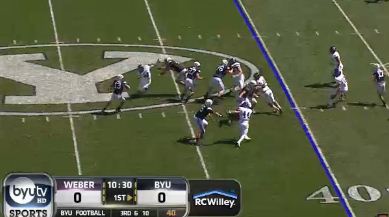 This resulted in a loose ball that refs ruled was a forward pass.
Time from snap to hit: 3.5 seconds. 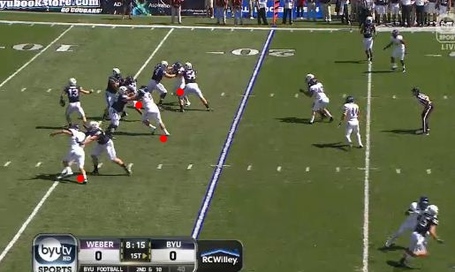 The OL does its job, pushes the edges to the outside and holds up the middle -- but nobody gets open. 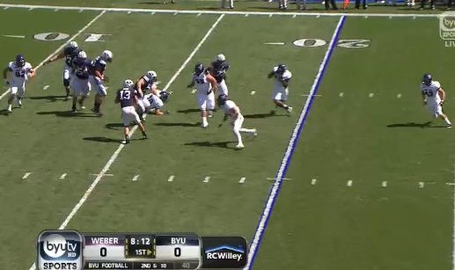 Riley steps up in the pocket but still doesn't deliver the ball anywhere until the last second, when he gets plastered by a linebacker playing spy. 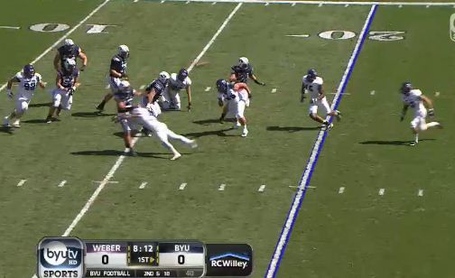 On the replay, you see Nelson missed two wide-open receivers and threw to the covered one, and it was almost intercepted. 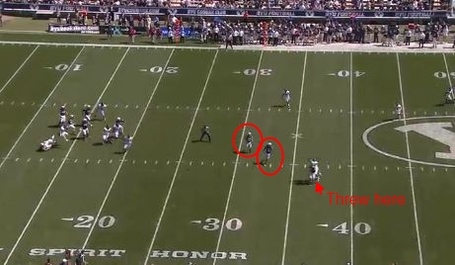 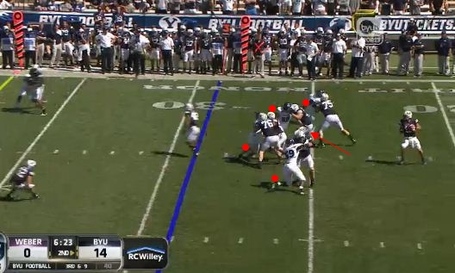 The right guard gets beat on a simple stunt. Both DE's curl under and behind the tackles. The result is Nelson getting a glancing hit to his legs. 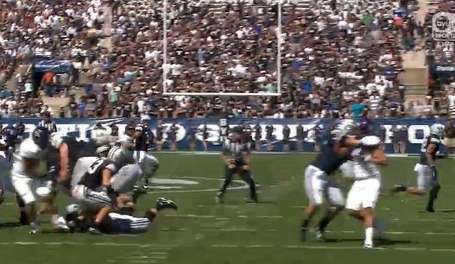 Time from snap to hit: 2.6 seconds. Not good at all for a four-man rush.

The hit that currently has Riley Nelson possibly less-than-healthy as then came on the next play, but it was on a designed run. He got flopped onto during the tackle. BYU scored a touchdown on a Michael Alisa run.

BYU got the ball back with just over a minute left, and Weber State changed to a three-man rush. But that didn't keep Nelson totally safe. 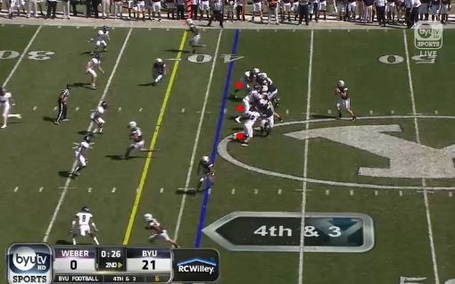 Nelson is not able to find an open receiver, turns, and resets the pocket. But the nose tackle spins to his right and gets by two BYU OL. 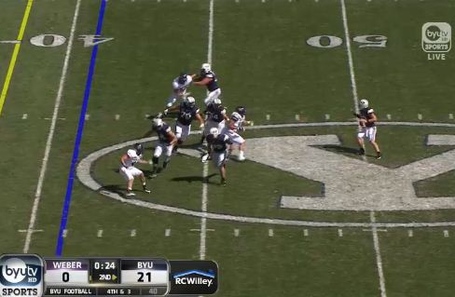 With a man in his face, Nelson overthrows a relatively-open JD Falslev and the pass is intercepted. 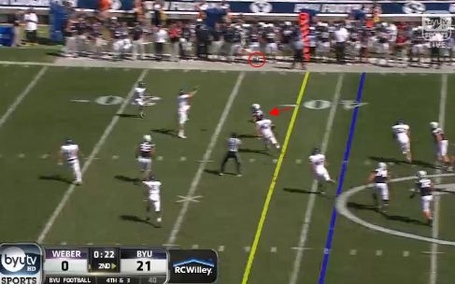 Nelson played in only the first half. He was not sacked, but was hit five times. Two of them were hard hits, one was a split-second away from being a fumble instead of an incomplete pass, and the pressure from one resulted in an interception. The other was the glancing blow at the legs that came on a long completion to Richard Wilson.

On only one of the five plays was Weber State rushing more than 4 people.

I would classify hits numbers 3 and 5 as "coverage hits." These were plays Nelson kept alive by relocating after not finding an open receiver, then taking a hit after throwing. In both cases, the results were awful -- a near-interception and an interception. While Nelson did have 4.35 seconds to throw in Hit 5, Weber was only rushing three players, and the man who created the pressure beat a double-team.

In Hit 5, it is hard to say if this was Nelson not making good reads or receivers not creating separation without an "All 22" camera view. On Hit 3, however, Nelson had two open receivers across the middle who broke off routes after he reset the pocket, and he missed both of them. In other words -- his ability to prolong the play worked that time, he just made the wrong read.

To me, it seems the other three breakdowns are simply from getting beat one-on-one, not being overwhelmed with quantity. This concerns me.

What are your thoughts, Cougar fans? Is this of concern? And am I reading these plays correctly?