On The Road: Blue in Boise

On The Road is back! VTF's own traveling man, Presten Norton, details his quick jaunt to Boise last Thursday.

Share All sharing options for: On The Road: Blue in Boise

Since I don't really consider games at Utah to be true road trips, Boise State was my first real trip of the 2012 football season -- and boy did I start of the season in an adventurous manner. I'd been planning on attending this game for months, however due to unforeseen circumstances, the trip almost didn't happen. I was faced with a last minute decision on Tuesday that almost forced me to skip the game all together because in the big scheme of things, football wasn't my priority.

I know it's hard to imagine, but even for me, BYU football takes a back seat to real life. With no prior notice, I found out I had to be in Los Angeles at 10 AM on Friday morning. Considering the game may not end until after 11 PM Thursday night in Boise, I figured there was no way I could make both events.

Luckily, using multiple airlines and a random connection, I was able to find a creative solution that allowed me to both attend the game and still keep my priorities intact. Unfortunately the solution meant I'd have to drive, not fly, to Boise. It also meant that I wouldn't have the luxury of exploring Boise and BSU like I'd wanted to on Friday. I usually make it a point to see the local campus and hit up some hidden gem restaurants while I'm on the road, but this trip was all business. Instead of extending my trip, I'd get to pound the pavement as soon as the game clock struck 0:00, because I had to catch a 5:30 AM flight out of SLC.

Let the marathon journey begin. With my updated itinerary in hand, I went into work at 6 AM so I could leave at 11 AM and get on the road to Boise. Thanks to some fellow BYU fans on I-84, we made great time getting to Boise. Since I'm sure my mother and grandparents will read this, I won't divulge exactly what that time was. I'll just say I wasn't ever pulled over, so technically everything was legal.

I was quite surprised just how good the game day experience at BSU is. The pregame tailgate crowd was huge! The entire parking lot was a sea of blue and orange canopies and RV's all set up for tailgating. Though we didn't quite get the Ole Miss hospitality, we were offered drinks from a few fans and had many well-wishing BSU folks greet us. 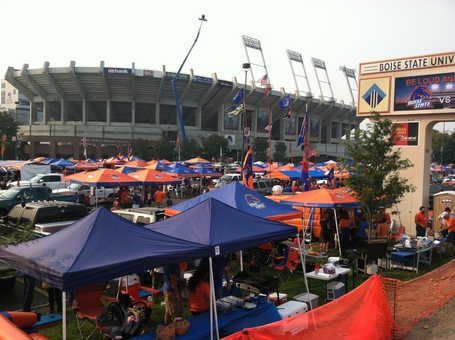 Since we were fairly early, we were able to catch BSU's live pregame radio show, which included an interview with the voice of the Cougars, Greg Wrubell. Per usual, he blew Bronco fans away with his knowledge of not just BYU, but also BSU stats. He absolutely schooled the local hosts about their own team, it was awesome. 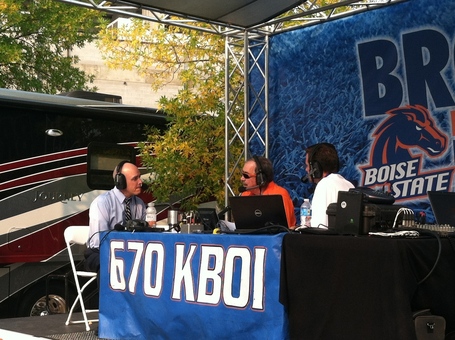 I'm not gonna lie, my opinion of BSU hasn't been too positive over the years, so I was pleasantly surprised how engaging and sincere many of their fans were. The students on the other hand, well, they proved most of my previous feelings were accurate. The comments, attire and gestures toward us were exactly what I expected.

What blog about a trip to Boise would be complete without mention of the hideousness knows as the Smurf Turf? Boise fans think it's amazing and endearing; I think it's a disgrace to college football and should be banned. First, it's annoying as heck to look at, just a big distraction.

It's pretty sad that BSU doesn't have enough credibility as a university or community to rely on, so they have to revert to gimmicks for attention. Second, I finally found one thing MWC Commissioner Craig Thompson was right about, the all-blue unis on all blue turf is a competitive advantage. Look at the picture I took while watching the replay and tell me BSU players don't blend in with the turf. 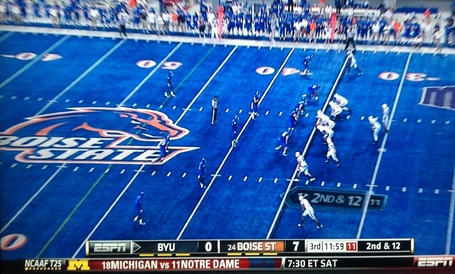 The atmosphere was great. BSU fans are loud and have fun. I was engaged in conversation with BSU fans throughout the game and really enjoyed our conversations. I talked to quite a few fans outside the stadium before the game and also during the game. In general they were pretty excited to have BYU back on the schedule and the game even set a new Bronco Stadium attendance record! 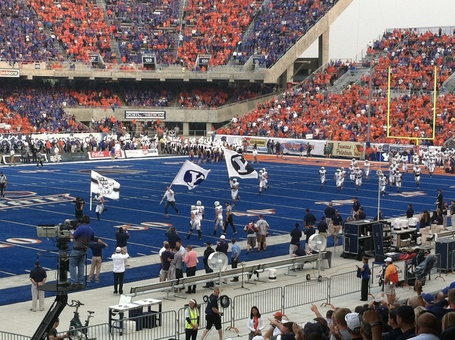 Overall, I'd say Boise fans were definitely classier than I was expecting. The season ticket holders in the row behind us were very fun to chat with during the game, it was fun. The mother was even genuinely worried when she found out we'd be driving home after the game. She took the time to give me a thoughtful lecture about staying awake and being careful just before we headed out.

As for the key plays, many true bloggers and reporters have hashed out and debated them quite well, so I'll just sound off on a few points. A quick disclaimer, I'm just an average fan with basically zero playing experience (I'm a baseball/golf guy), so I may be out in left field, but I don't really care.

It's amazing. Period. I can't remember BYU ever having a defense that was this solid overall. Sure we have a couple weaknesses, but who doesn't? In both of our losses this year, our offense has basically given the opposition most of their points (or ALL of their points in the case of BSU, thanks Riley). If it wasn't for our D, we'd have been blown out in Boise. Think about it, we coughed up the ball 5 times (read that again...FIVE FLIPPIN TIMES) and BSU still didn't have a single offensive point. That's impressive. I'm going out on a limb here, but I highly doubt you'll see another FBS team have a 1st and Goal at the 1, run all 4 plays without a penalty, and not score. That momentum from that stand was should have been a game changer. Le sigh.

After a couple days of twitter and newspapers, I know for a fact I'm in the minority on this one. But I'll just state up front, I LIKED the decision to go for it. Sure hindsight is 20/20 and it's really easy to second guess the decision once the pass fell incomplete, but in the moment, it was the correct call. BYU had momentum. Taysom had just led a 95-yard scoring drive. BSU's D was on their heels. The odds that we could gain 3 yards on 1 play were fairly high. With all that said, did we really want to pin the ball game on a possible FG in OT? Let's be honest, our kicking game isn't amazing...and I doubt BSU students were going to give us 3 attempts in OT. Too soon?

I've heard all the arguments for kicking the PAT, I'm just not convinced. BSU had the home crowd and an offense that was starting to move the ball late (see: Final drive). You play for the tie at home, play to win on the road. I supported Bronco's call at the time and I still support it days later. The only thing I'll question is Doman's play call. Taysom had just rushed for about 40 yards on the drive, capped off by dump trucking five BSU defenders into the EZ for the score, so why on earth do we have him rolling out for a pass play on the conversion? BSU proved they couldn't stop Taysom or Alisa, so why change it up? But then again, no one's ever paid me to coach football. There's probably a reason for that. 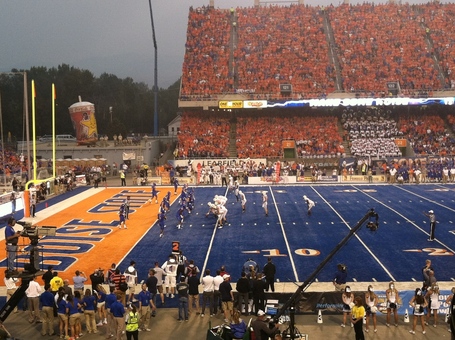 With all that said, I'll end my football rant with this: FREE TAYSOM. He's the future of BYU football, and the time for our future is now. Riley was the right man for the job when he was healthy. Well, he's no longer healthy. I hear all this talk about what a great leader Riley is...well if he's such a leader, he'll realize that playing injured isn't proving he's tough, it's hindering his team. If he's such a leader, he'll admit that in his current state, he's not the man for the job. Give Taysom the ball.

Once the game ended, we were immediately headed home. I had already stocked up with 5-Hour Energy and two bags of sunflower seeds, so after a quick stop for gas and Dr. Pepper we were on our way. Luckily Greg Wrubell's postgame show and "Cougar Nation Now" ran an extended edition that night, so I was able to get through a good chunk of the drive without even noticing. (Note: If you haven't ever tuned in to KSL's postgame coverage, you should. The coach/player interviews are great and for the last hour Greg incorporates fan texts, tweets and emails into the show. It makes for some very good debates and conversation.)

One of the highlights of the trip was the fact I was able to drive 750 miles round trip without seeing a single UHP or IHP trooper, which is kind of a big deal when you're on a tight schedule! We got back to Davis County just after 3:00 AM, which gave me just enough time to change clothes and head for the airport. It wasn't the most exciting trip, but it definitely beat sitting home and screaming at my TV!

See you in South Bend!

Presten lives an awesome fan life in which he travels to most of BYU's football and basketball road games. He writes about his travels in a feature called On The Road. Past trips can be found here.