The final results are in from all across the blogosphere -- the first BlogPoll Top 25 is here. Alabama takes home the #1 ranking, with USC and Oregon also receiving first-place votes. Did BYU make the national poll? How did our ballot here on VTF compare?

There you see our beloved Cougars in the 29th position, having received votes, but not enough to get ranked.

Make sure you check out the always awesome Ballot Watchdog that Andy Hutchins performs on each week's poll. It runs down which schools the voters disagreed on the most (Ohio State), which blogs vote against the current, and which are the biggest homers.

Our first effort (with more of our own voters to come aboard) earned Week 1's "Straight Bangin Award," given to the site whose poll is the least biased toward the team that site represents. This means that many other ballots included BYU in the Top 25, but ours did not. Hopefully this means we are as objective as possible here, but as Andy says, "A low number indicates that you suffer from an abusive relationship with your football team." Maybe so!

This can be a bit confusing, because here on VTF, were aren't just having one writer submit a Top 25 and calling it a day. We have our own staff of voters, so this results in our poll on VTF having a "also receiving votes" section. But for our submission to the national BlogPoll, only the Top 25 are submitted. So while BYU came in at 26 on the VTF ballot, it did not make the top 25 and therefore received no points from us in the national BlogPoll.

Or in other words: 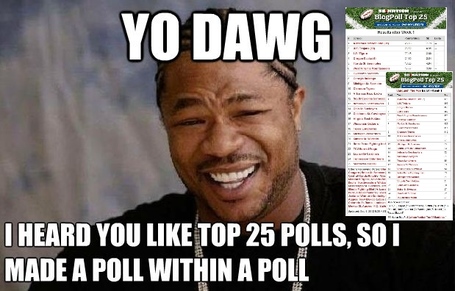 Sorry if it's confusing -- but that's the best I can do to explain it.

Let us know your thoughts on our ballot or on the national BlogPoll!