This isn't really winning, it is just not-losing in style

BYU's win over Middle Tennessee State was not really a close game, didn't have too much excitement, but it sure was fun to be at.

Share All sharing options for: This isn't really winning, it is just not-losing in style

I graduated from BYU in 2011, just over two years ago.  In that limited amount of time I have failed to become rich, so in choosing which BYU football game to attend this year, I chose the cheapest one against a non-FCS team.  Thus was born my experience watching BYU beat MTSU in person.

Along with my wife, I brought with me our 6.5 month-old baby, my wife's brother (a BYU Law student) and his wife.  We arrived a little late to the game, and were a little surprised to find the score 3-7 as the scoreboard flashed that we had gained only 32 yards to their 70+.  Not exactly the way i wanted to start the game.

It's amazing what you can see with your own eyes, even without a replay. Not long after our arrival MTSU scored their final points of the evening. The touchdown pass was initially ruled incomplete.  I happened to be sitting in section 29, row 16, and that play happened right in front of me.  Both my brother-in-law and I were surprised and skeptical on the ruling, and we turned out to be right as the play was reviewed and the Blue Raiders took the 10-7 lead.

On the ensuing BYU drive, the second quarter started and the teams flipped sides. The Cougars were now coming towards our end zone, the perfect time to witness a touchdown up close.  A few great Taysom Hill carries later we were silenced by his fumble on the two yard-line.  My confidence in a BYU win was waning.

As the offense and defense swapped places, I watched as Kyle Van Noy sauntered onto the field.  (I wish now that I had taken a video of this because just the way he walked made the moment all the more amazing).

As the linemen took their places across from each other, and the Middle Tennessee offense finalized the play call, the face of BYU football, and likely the most talented player on either team, was the last person to walk onto the field, perhaps gathering his thoughts, getting into the zone.  In his post game interview he said that he just knew it was time to make a big play.  At this time, with KVN just 20-30 yards away from me, I stood up and yelled "Hey Kyle, I want a safety!"

Okay, I want to acknowledge that I do know that I probably wasn't the only person hoping for a safety, nor the only one to shout-out something about it.  Also being 16 rows up, I probably wasn't audible to KVN (though it's possible), and even if I hadn't said it, the outcome of the next play would probably not have been any different.  Regardless, I readied my camera and stood in anticipation.  In getting my camera ready I didn't actually see where KVN lined up, but I knew if I just focused on the QB and running back, then I would see the action.

It was a fantastic moment, not for the two points, but for what it meant to BYU as a whole.  It said that our defense is superb, that big plays can happen at any moment.  It gave the ball back to our offense and set them up for another great drive down the field (minus the Alisa fumble).  It was like Kyle was saying to Taysom, "I got your back... this time at least."

The game went on, the night grew cold, and BYU came out on top, thanks primarily to a stout defense.  The offense did have it's moments though, and I'll share some pictures I took that I think illustrate the game fairly well (despite a bit of motion blur).

Here Brett Thompson (19) just caught a pass from Hill, taking full advantage to the soft zone defense (notice how far he is from anyone else).  BYU had a decent night passing, keeping Hill protected was key in that regard and there were fewer drops by the receiving corps. 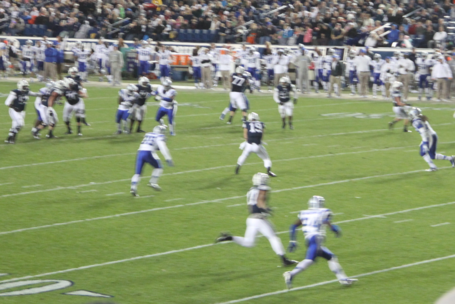 Then here's Taysom doing what he does best, defender in tow.  Hill finished with 177 passing yards and 165 on the ground.  Had there been a healthy Jaamal Williams or Adam Hine, Hill might not have had to run it himself so much, but he seems to enjoy it, and does it well.  He especially seems to like running into the end zone and backwards high-stepping in celebration. 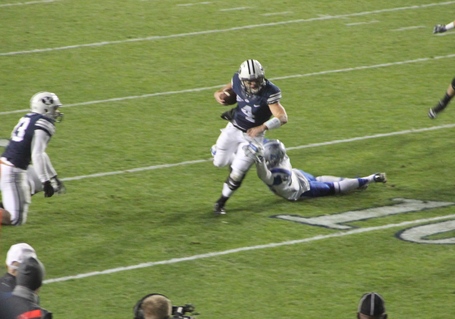 In the end, we won, but we all know turning the ball over five times is hardly winning... more like not-losing.  I think that BYU (mostly the defense) did a fine job of not-losing this game, and the offense added some style and flair to it as well.

As for my experience at the game, it is always fun to be at LaVell Edwards Stadium to cheer on the Cougars.  For those who love the sport, there really is a magical quality about the game day experience, and I'm glad I experienced some magic this season.  Hopefully the players start to feel that magic too and come home from Logan on Friday night as winners (not just stylized non-losers).