You may not know his name, but you know his voice.

My first memory of BYU Athletics was Jay Monsen's voice.

Here is a clipping from the Deseret News describing the 1992 Fandemonium programming: 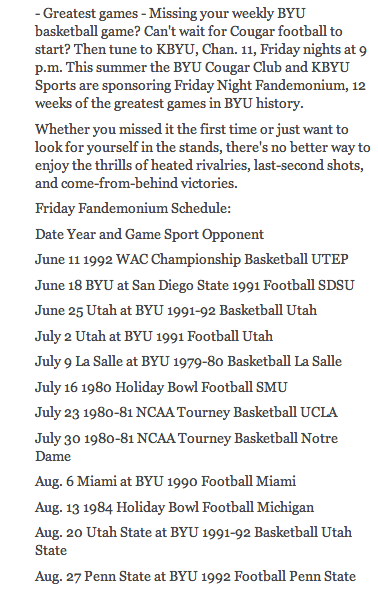 My friend Mitch Harper of the Cougar Center podcast brought the nostalgia back in full force:

Sadly, Mr. Monsen passed away on Sunday afternoon at the age of 79.

The thoughts and prayers of the entire Vanquish the Foe staff go out to Mr. Monsen's family and friends. He was a true legend in BYU community and his work will live on in perpetuity.

If you have ever rummaged through a vault of old BYU Football games, whether on BYUtv or in your own personal collection, you would have been introduced to the voice of Jay Monsen. Monsen began at KBYU in 1972 and narrated the careers of Steve Young, Jim McMahon, and Robbie Boscco. But his call of Ty Detmer's win against Miami may very well be his most famous.