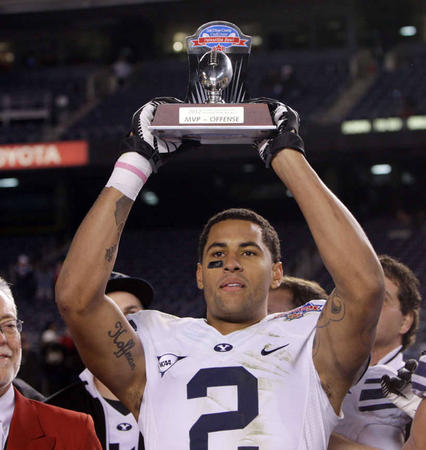 I am an optimistic BYU fan.

Each and every football offseason, I talk myself into BYU being on the verge of the "special" season. While that season hasn’t happened in my adult life, my preseason dreaming will go on. Until BYU loses its first game in a season, my assumption is that the undefeated season is happening.

Then there are pessimistic BYU fans.

Pessimistic BYU fans enjoy nothing in life more than dumping cold water on the optimistic fans’ dream. It’s a win-win situation for them, because if 1) they are right, they will never let you forget it, or 2) they’re wrong, then their team wins, so they’re happy.

BYU fans often are labeled "unrealistic" by non-BYU fans (and pessimistic BYU fans, as mentioned above). Let’s see how "unrealistic" BYU fans are a week or so before training camp starts.

About 10 days ago, I asked Cougar Nation to fill out a survey indicating how they felt about BYU’s chances of winning each game on the 2013 schedule. Additionally, the survey included a question which allowed respondents to list the games they feel BYU will win this year.

In total, 327 surveys were filled out in less than a week – twice as many as last year. Here are the results:

We'll go ahead and order this data to help give you a feeling of which matchups BYU fans are most concerned with:

It seems BYU fans, for the most part, have pretty realistic expectations for the 2013 season. The expected teams were at the top of both lists. (Although I thought Texas would be listed above Wisconsin. Fans must value home field advantage.) If we go off the games the majority of BYU fans said BYU would win, that's only an 9-3 season. Not really a true blue-goggled approach.

Looking at the results, I thought it was pretty interesting how much confidence fans got from BYU's dismantling of Georgia Tech last year. A win is definitely likely, but to more confident in a GT win than a win against Nevada or Houston seems like a stretch.

Probably the most surprising takeaway from the survey results is that a higher percentage of participants thought BYU would beat Middle Tennessee than Idaho State. However, considering the small difference between the two, my father, an Idaho State alum, is probably to blame.

Anyway, I took the liberty of simulating the outcome of 200 of BYU's 2013 football season based on the average odds fans gave through the survey. This gives Cougar fans an idea of what kind of season they can expect in 2013:

The good news is it is very unlikely BYU won't be bowl eligible in the 2013, but, unfortunately for us pie-in-the-sky BYU fans, the chance of a BCS Bowl appearance in 2013 is even less likely. Truth be told, BYU is most likely to end the season with about 7-9 wins. Not terrible, considering the opponents.

Just for fun, I decided to take the numbers from which games fans said BYU will win (the last column on the first table), use them as odds, and simulate the 200 seasons again. Here's what we got:

Again, both a BCS Bowl appearance and a bowl-less season are highly unlikely for this BYU team. The biggest difference in this set of simulations and the previous is where the "likely" outcome lands. Nearly three-quarters of these outcomes resulted in a season of 9-11 wins, a result I think the majority of BYU fans would be satisfied with.

Here's hoping we're not clinically insane ... as a group.