The glory days of BYU kicking are back

Many remember with reverence the days we had a reliable kicking squad. According to recent news, we may be back on track for those glory days again soon.

Share All sharing options for: The glory days of BYU kicking are back

Or so they say.

A long, long time ago, in a glorious depth chart almost forgotten, we had a solid set of kickers. They surprised you by making impossible kicks, not by missing easy PATs. You relaxed when they stepped onto the field, not clenched your gluteus maximus in preparation for an embarrassing attempt.

Back then, you knew we'd walk away with an extra point (or three). You were confident that our kicking lineup would never disappoint. And they hardly did.

Justin Sorensen was no exception. There was a lot of hype his first year. He was well known coming into BYU for his 62-yard field goal at Bingham High. His fame only increased when fans found out that he spent his weekends riding his unicycle up a mountain, "just to keep his legs in shape" he said. 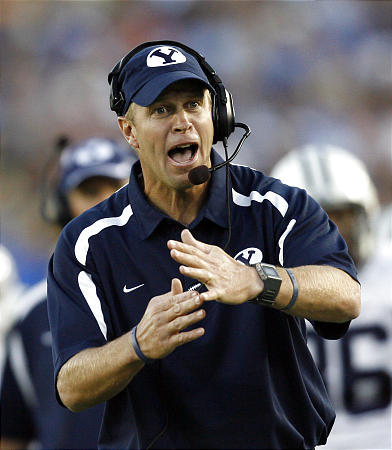 After last season, those days seem long behind us. Our previous powerhouse kickers have moved on, and our star, Justin Sorensen, has had a rough return to football. This poor man has been riddled with injuries and medical issues over the past years that have limited him from performing at his best.

Injuries have included a broken ankle, blown back, and hospitalization for an incident with a brown recluse spider. We saw the consequences of this "season of setbacks" from the first game in the 2012 season and it only got worse as the season went on.

The Problem With Last Season

The problem with last season was that the season opener kickoff was only Sorensen's third kick of the year. He didn't have a summer to practice. He only had 2 practice sessions around a busy school schedule. He was kept from practicing due to a back surgery.

Sorensen told reporters that he has been limited, physically, in previous years: experiencing a "tweak" in much of his performance.**

Could the Glory Days Be Coming Back?

Sorensen seems to think so. Despite his history, reports recently acclaimed that he is, in his own words, back to 100%. This is the first off-season that Justin has been healthy. He says he isn't limited anymore. He's been able to practice all summer for as long and as often as he wants without restraint. With full use of his body again, he's able to put that ball through the uprights in good ole' Cougar fashion.

Bronco agrees. Mendenhall was caught praising him, "Justin Sorensen is separating himself over the last couple of days, so that gap is widening, not narrowing [referring to the gap of skill levels between Sorensen and the other kickers]. He's doing a really nice job." He then proceeded to talk about things that we could improve on in true Bronco fashion.

Sorensen's feeling good. Bronco is feeling confident. Fans can finally see a glimmer of hope, because when the kicker takes the field, he doesn't go alone. He takes the hearts and hopes of every Cougar fan watching from the cold hard bleachers of Lavell Edwards Stadium or warm plush couches of your home. When he succeeds, we succeed. When he fails, we fail.

This could be the return of Cougar kicking as we knew it. I, for one, am looking forward to Sorensen's performance in the coming games. I guess we'll know in just under 12 days! Looks like this year is looking up for us.