Now that BYU's recruiting class is in the books, we can take a step back and look at the hotly debated question: do recruiting star rankings really matter, and if they do, has BYU overachieved, or underachieved, on the field?

The dust has finally settled on the 2014 BYU football recruiting class, and it's given many BYU fans something to be excited about. From the dramatic speed and experience infusion at wideout, to some intriguing defensive prospects joining the squad, to an improvement in overall speed at multiple positions, to closing strong against big schools near NSD (a rarity among recent years), it isn't hard to see why this class would be considered a success. As we wrote about before, this would rank among Bronco's finest in his BYU tenure.

When you stack up the recruiting haul nationally though, the results look a little less spectacular. Per 247's composite rankings, BYU finished with the 66th best class this season, behind schools like Marshall, Kansas, Duke, Oregon State, and others with less distinguished football programs than the Cougars. While linebacker Fred Warner is a composite four-star recruit, BYU's other signees were all either two or three star players.

Now, several BYU fans would say that fans should take BYU's middling ranking with a giant grain of salt. After all, it doesn't account for perhaps BYU's biggest catch, UTEP WR Jordan Leslie, who transferred and projects to start right away. Thanks to the complications of juggling scholarships with missionary service, this BYU class was also comparatively small, signing only 20. Granted, Utah signed only 19 and had a slightly higher ranking (64), and a few other schools with recruiting limitations also signed superior small classes (Northwestern signed only 16 and had the 45th ranked class, Maryland signed 17 and had the 43rd, UVA signed 17 and was ranked 32, etc). Perhaps had a few extenuating circumstances changed, BYU climbs into the top 50, something they've done only once in the last five years.

Well...yes. Yes they do. That's been pretty conclusively proven, most recently in this excellent article by Football Study Hall's Matt Hinton, which you may have read last week. If you aren't going to read the whole there, here is the basic gist.

Hinton charted the average star rating (composite) for all the major BCS schools, along with BYU, Boise State, and a few others, from 2010-2013. BYU clocked in as a two-star recruiting program under that time period. Then, Hinton tracked wins and losses in every game over those seasons, to see if there was a relationship between winning percentage and perceived talent level. I've pasted the charts below. 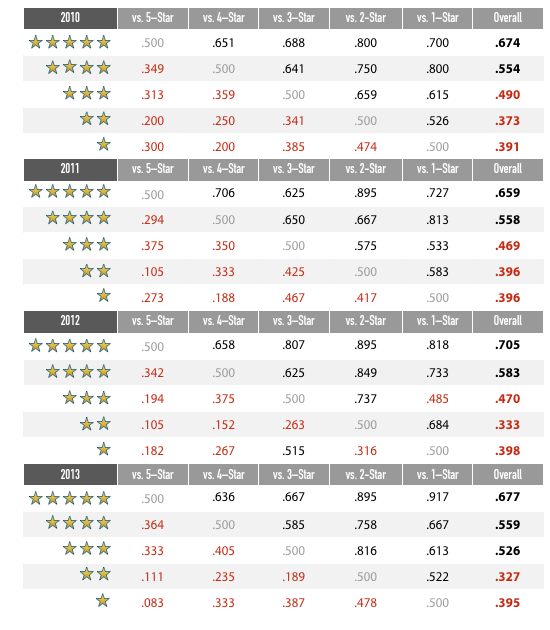 The data is pretty explicit. Teams with more stars typically beat teams with less stars, and when the difference becomes more pronounced, so does the probability that the higher star team will win. This data is pretty clear: higher recruiting rankings lead to success on the field, even if individual recruits boom or bust.

There are a few individual exceptions to this rule though, for various reasons. What about BYU? Do they follow the trend? To figure out, I took a look at BYU's results over the last few seasons, juxtaposed to the level that team was recruiting, per Hinton's rankings. The data is below:

* BYU slightly overperformed against the elite recruiting squads they faced...but also in a pretty small sample size. It's difficult to draw too many conclusions from their performance against four star competition. The Cougars only faced three teams, with two of the games being against Washington (the win was against a Husky squad that also finished 7-6, not exactly the stuff of legends). The one point win on the road was against an Ole Miss team that didn't win a single SEC game. If anything, BYU probably should have won by more.

*Again, small sample size, but BYU also struggled a little bit against squads with either similar talent, or slightly better, with a combined 5-9 record against 2* and 3* teams. Only three of those wins happened against teams with a winning record (Georgia Tech twice, Houston once), and none of those teams would qualify as exceptional or anything. BYU's lone 3* victory came against an Oregon State team that won only three games. If BYU had taken care of business against fellow 2* team Utah a few times, this record would look a lot shinier.

* The one place where BYU has dominated is against teams with less talent than them, vastly surpassing the average of 2* squads against 1*s. Recruiting in the mid 60s may be an issue against Texas and Florida State, but not against some of the very dregs of D1, which would include New Mexico State, Idaho, or UNLV. One of the marks of a well coached team is the ability to beat the teams you should, and BYU has unquestionably done that over the last few seasons.

What do these trends mean for the future? Let's take a look at next year's schedule:

I've adjusted the rankings a little bit, moving Boise State into the 2* range to reflect their most recent recruiting. Comparing this list to what many BYU fans might consider to be the toughest games of 2014 may be interesting, since I imagine most folks would point to UCF as probably being the second most dangerous game, even though BYU as actually out-recruited them for the last few years.

Future schedules haven't been totally finalized yet (I'd be surprised if the 2015 slate, for example, adds many more BCS caliber teams), but BYU does have several future games with teams that are recruiting at a higher level, from the top (Michigan, 5*), to the very good (Nebraska 4*, USC 4*) to the good (Arizona, 3*, WVU, 3*). If recent history is any indication, even if those opponents are underachieving a little, BYU will still have their work cut out for them.

The way the Cougars closed their last class, including beating USC and Stanford for players, should be a heartening development for fans, but they're still a long way to go from closing the talent gap with what they might consider to be peer football programs. For the program to meet their aspirational program goals, they'll either need to continue to find ways to broaden their talent pipeline, or bet everything on their potential to become one of the very rare teams that can consistently punch about their talent weight.