The 2014 Cougar Fan Fest was a blast. If you couldn't make it, find out what you missed.

Over the last couple of weeks the Cougar 2014 Fan Fest made stops in St. George, Cedar Hills, and came to a conclusion Thursday night in Davis County. The Cougar Fan Fest was a blast for those of you who made it. If you missed it, make sure to get there next year. Greg Wrubell, Voice of the Cougars, was the MC for the evening and challenged the crowd with BYU trivia. Participants who could correctly answer his questions won prizes, including football tickets and BYU end zone pylons autographed by Taysom Hill and Bronco Mendenhall. 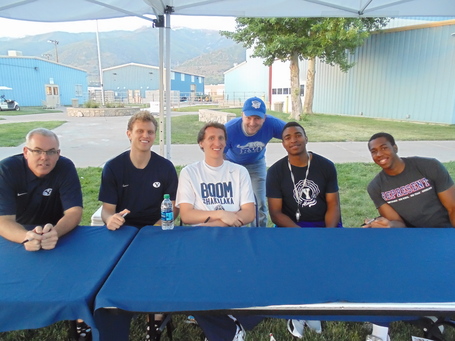 Speaking of autographs, athletes and coaches were on hand to autograph team posters. The softball, basketball, soccer, and gymnastics teams rounded out the women's sports while the football and basketball teams were representing for the men's sports. If you're curious, Terrence Alletto, Nick Kurts, Mitch Matthews, Skye PoVey, Craig Bills, and Kurt Henderson were the football players present. Alletto was great with the kids and even offered to take pictures with babies (Could that be part of his #tweetsforterrence campaign?). Dave Rose, Tyler Haws, Skyler Halford, Anson Winder, and Jamal Aytes were there from the basketball team. 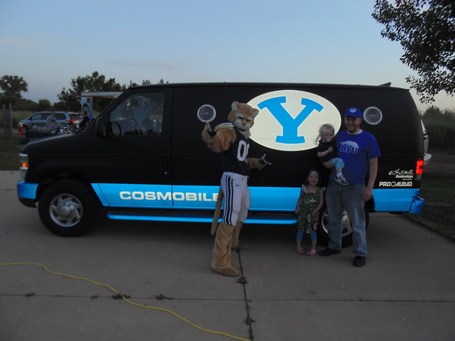 Also present were fun activities for the kids including bounce houses, face painting, trying on football pads and helmets, and football, basketball, and soccer drills. Cosmo was present, with his Cosmobile, high fiving everyone, and the cheerleaders even did some stunting with the little ones. 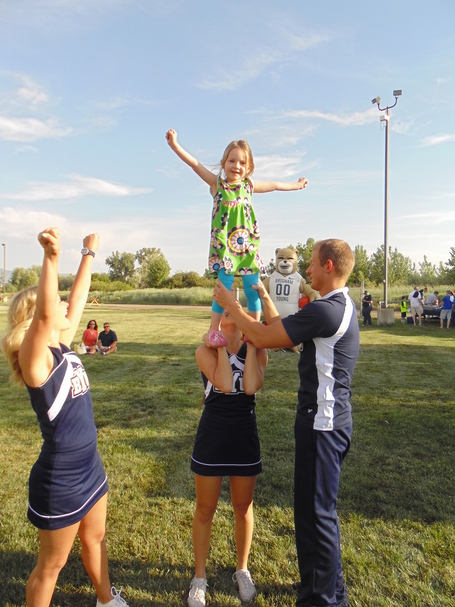 AD Tom Holmoe could be found wandering around the event. When I spoke with him he confirmed that next year BYU will be taking the Fan Fest out of state. Fans in southern California can anticipate the Cougar Fan Fest around this time next year in the Orange County area.