Cleo and Tarbo were the original cougar mascots at BYU.

Athletic director Eugene L. Roberts did a number of things to establish athletics at BYU in the 1920's, like bringing Knute Rockne to campus. In 1923 he also chose the cougar as the school mascot for the following reasons:

...the cougar was looked upon most favorably because it is a native Utah animal, powerful and agile, wise and beautiful, lending itself to artistic illustration.

The following year, Colorado River guide, and BYU alumnus, David J. Rust captured a mother cougar and three kittens. He contacted Roberts and offered the kittens. Two of the kittens were bought for fifty cents each and sent to BYU, where they received the names Cleo and Tarbo. They quickly became adopted by George K. Lewis as his pets, but were often on campus. 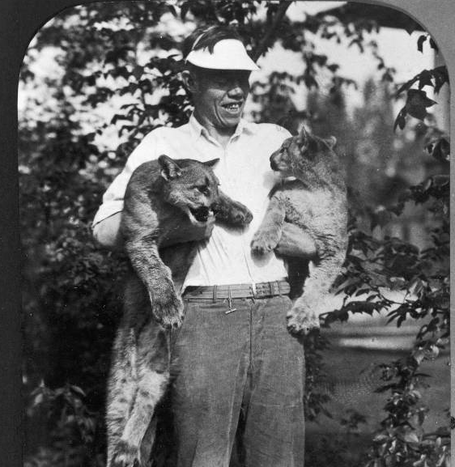 At one point in 1926 they caused quite a scare after being released on the dance floor at the Women's Gymnasium. Later, in 1929 Cleo and Tarbo caused another scare when they escaped from their pen and went on the prowl. They were recaptured the same day but not until after killing two dogs and stalking local livestock. A short time after that one of them died and the other was sent to the Salt Lake Zoo.

For a few decades BYU continued to use live mascots occasionally, but these came from bounty hunters and the zoo. 1953 was the genesis of the anthropomorphic Cosmo that we are familiar with today.