Share All sharing options for: 2013 NIT bracket and schedule

With a granting of a 3-seed to the NIT on Sunday night, the BYU Cougars were granted a home NIT contest for the first time since 2002. BYU will host the Washington Huskies (18-15) at 7:30 pm MT on ESPN.

The 32-team tournament takes place on campus locations for the first three rounds, then culminates with the semifinals and finals at Madison Square Garden in New York.

Here is the full NIT bracket: 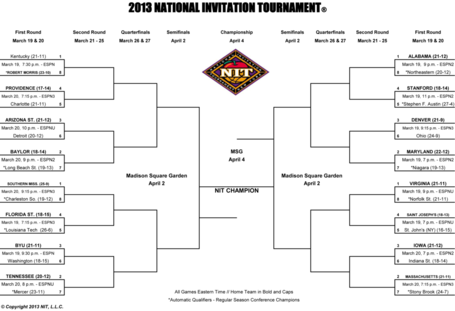 via Rumble In The Garden

BYU claimed the 1951 NIT championship at a time when the NIT's prestige was equal to or greater than the NCAA Tournament. The Cougars also won the 1966 NIT.

BYU's last appearane in the NIT was in 2006. The Cougars lost a first round matchup on the road to Dave Rose's alma mater Houston Cougars, 77-67.

2000 marks BYU's most recent long NIT run. The Cougars dominated two home contests by 25 or more points over Bowling Green and Southern Illinois, then dropped a road contest in the quarterfinals to Notre Dame.