The schedule includes in state rivals Weber State, Utah, and Utah State. The Cougar Tipoff to the basketball season will be Oct. 29.

On June 10th, head coach Dave Rose announced the BYU Basketball non-conference schedule. The release of the schedule also included the schedule for the Maui Invitational, which could include matchups against Arizona and San Diego State, who were both NCAA Tournament contenders last season.

The regular season will open at home against Arkansas-Little Rock on November 14th.

The schedule release also shows three game with in state rivals of Weber State, Utah State, and of course Utah. The Cougars will get a chance to redeem themselves after a dismantling loss Utah in the Marriott center, and face the Aggies and Wildcats on the road.

BYU will also face two other NCAA Tournament bid teams from last season including Stanford and UMass. Both of those games will be played in Provo at the Marriott Center.

For those of you who live in Salt Lake County or further north will get the chance to watch the Cougars play in the Energy Solution Arena against the Hawaii Rainbow Warriors on December 6th.

The schedule also includes two matchups that will be a first for the Cougars. These games are against Arkansas-Little Rock and Southern Virginia, both of these games will also be held at the Marriott Center. It is worth noting that outside the Maui Invitational, the Cougars will not leave the State of Utah in non-conference play.

Below is the released scheduled for BYU Basketball courtesy of BYUCougars.com. 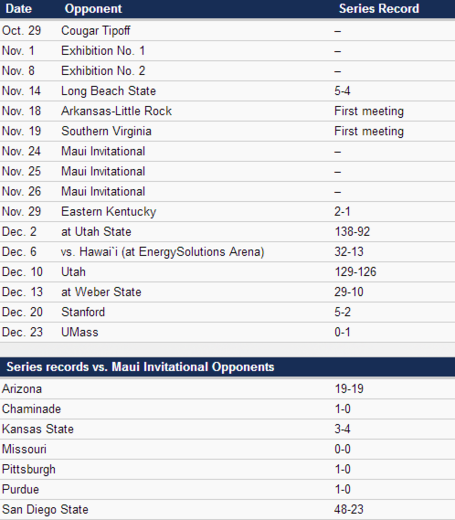