My first BYU game: Memories of fan genesis rush back with each season opener

Share All sharing options for: My first BYU game: Memories of fan genesis rush back with each season opener

No matter how many years pass, each BYU football season opener reminds me of the same things: an early Saturday wake up, a warm sun, rumbling metal, and the anticipation of something new.

As a 10 year old, I was already an avid sports fan. Four years earlier, I remember vividly how excited I was that a neighbor delivered to me a tape of a triple overtime game between the Utah Jazz and Chicago Bulls. Six-year-old me sat in awe as I witnessed (a day later than everyone else because my family didn't have cable) Michael Jordan get thrown out of a game. MJ, thrown out!

My father raised me well on the principles of sport and gave me plenty of opportunities to see them first hand. We had attended a good handful of Jazz games by the time I was 10. More often, though, I sat with him, a life-long educator, at the scorer's table or in the press box of high school games. Before becoming an athletic director, my dad would take almost any opportunity to earn extra money for our family by keeping score at these games. I got the best seats in the house right next to him.

My dad held a second job for the duration of his 30-plus years as a teacher with a city recreation department, creating schedules, supervising park and gym operations, and otherwise making the department tick. This was a full-time job in the summer for little league baseball and softball; in the fall and winter, it meant working gyms for basketball every Saturday.

That precluded attending any college football games together, a fact that never did and still doesn't bother me. My dad was one of the finest teachers of sports fundamentals I've known, and took me to numerous sporting events in my childhood. His work ethic usually didn't exclude time with him, whether it was playing catch in our backyard, attending my own games or taking me to watch others. As a graduate of both Weber State and BYU, my dad emulates his father about local college teams: he wants all of them to win. So there wasn't necessarily a burning passion to go witness any college football teams play in person.

College football was just the one thing that didn't work out, and that was fine.

So I woke up decently early on Sept. 21, 1996, to prepare to attend my first BYU football game with a pair of friends, Zach and D.J. When it comes to attending games, Zach's father is very much the Mormon antithesis. I mean, he's a great person and doesn't act up or anything, but in matters of time, no time is too early for him to arrive at a game.

This usually meant not having to wait in traffic, being able to watch warm-ups, and otherwise having an all-day experience, which was cool. It also meant that for a noon kickoff (remember noon kickoffs? They were totally a thing once upon a time), getting to Cougar Stadium early with an 80-mile drive required an early start.

I remember when walking up to and inside the stadium, it seemed enormously big to a kid like me. As is apparent, the biggest crowd I had experienced to that point was just shy of 20,000 at a Jazz game. The football crowd of over three times that was impressive. The majestic beauty of the Wasatch Mountains rising up over the stadium to the east made the scene impossibly grand.

It was a beautiful afternoon. Skies were clear and the temperature was in the mid-70s at kickoff. The metal stadium rumbled with 65,000 fans stomping their feet as New Mexico's kicker approached the ball.

The New Mexico Lobos gave BYU a battle in one of the more forgotten games of the '96 season. New Mexico was 3-0 and the Cougars had just suffered the disappointing loss in Seattle. Kaipo McGuire caught a touchdown pass in the second quarter to give BYU a 10-7 lead at halftime, and I remember walking the concourses during halftime discussing with my friends if McGuire or K.O. Kealaluhi was the better receiver.

In the third quarter, New Mexico returned a fumble 18 yards for a touchdown and a 14-10 lead. I remember being nervous but was sure BYU would win the game. Even before the season unfolded, I guess 1996 was special.

Ronney Jenkins would rush for a touchdown to give BYU a 17-14 lead after three quarters. In a way few have done at BYU, Jenkins was given the handoff and sped around the edge on the sweep, untouched into the end zone. But the Cougars weren't out of the woods yet.

Just as the fourth quarter was beginning, New Mexico lined up for a 37-yard field goal to tie the game. The Lobos were kicking toward the north end zone. I can't remember if we were sitting in the NEZ or on the north side of the west stands, but we were sitting on the side where the play lined up and I remember having a really good view of the play.

BYU would go on to win every regular season game after this day by at least 20 points, and in a 14-1 season, something like this play in game four seems to have been largely forgotten. On a defense full of studs — Tim McTyer, Brad Martin, Shea Muirbrook, Henry Bloomfield, Jason Walker — one player came around the edge and blocked that field goal.

Thanks, Omarr Morgan, for securing that win and helping hook me to BYU football. 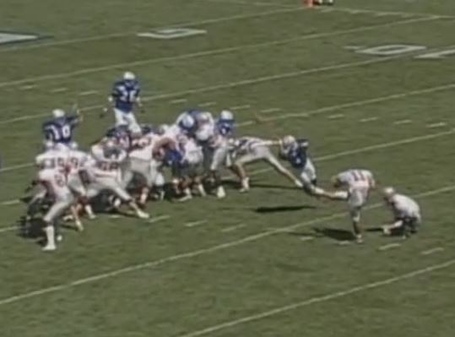 Having tasted a BYU victory in person, I remember driving home in the evening thinking that I couldn't wait to return to Cougar Stadium. Luckily, later that season I was able to watch a beatdown of UTEP from the press box with Zach's family, who had some connection to Rondo Fehlberg.

I think of this game every year as fall camp concludes and the season begins. When leather meets leather Friday in East Hartford, Connecticut, I'll be thinking of this game 18 years ago and how I became addicted to college football.

I'd be hooked either way, but the success of the '96 season definitely helps romanticize that game in my memory. Here's to another special season that can cement a new generation of BYU fans.