All the nuts and bolts you need to know about Georgia Tech and the Yellow Jackets football team.

Time for another Know The Foe bio blast. This week, BYU is in the south to play Georgia Tech for the third time in school history. 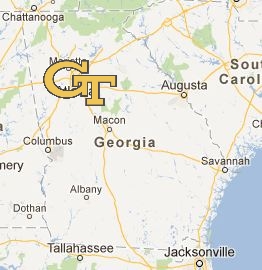 Best seasons:
1990: Co-National Champions (with Colorado) with 11-0-1 record. The only blemish was a 13-13 tie on the road at North Carolina. Bobby Ross's Yellow Jackets defeated #1 Virginia on the road, and destroyed #19 Nebraska in the Citrus Bowl 45-21. The defense allowed just 15.5 points per game.

Player-Alumni
WR Calvin Johnson (2006) The man they call Megatron was an All-American his junior year in 2006 when he caught 76 passes for 1,202 yards and 15 TD. He entered the NFL draft after that season, going 2nd overall to the Detroit Lions. With his 6th NFL season in progress, Johnson has 6,464 receiving yards and 50 TD.
WR Demaryius Thomas (2009) The receiver threat helped turn Paul Johnson's option offense into a near-unstoppable force. Despite GT running the option, Thomas hauled in 1,154 receiving yards and 8 TD in his final season at GT, helping them to an 11-3 record. He was drafted 22nd overall by the Denver Broncos.
LB Keith Brooking (1997) The linebacker has insane longevity, currently in his 15th season in the NFL (11 with Atlanta, 3 with Dallas, currently with Denver). He played in all 16 games in 9 of those seasons, including 8 straight. He has recorded 955 tackles and 13 interceptions in his NFL career.
Coach John Heisman (1904-1919): The namesake for college football's most heralded award coached at Georgia Tech for 16 seasons (by far his longest coaching tenure), amassing a 102-29 record, including a 9-0 mark in 1917 that won a national championship.