All the nuts and bolts you need to know about Idaho and the Vandals football team.

Share All sharing options for: Know The Foe: Idaho Bio

Time for another Know The Foe bio blast. This week, BYU hosts a struggling Idaho for the second year in a row. 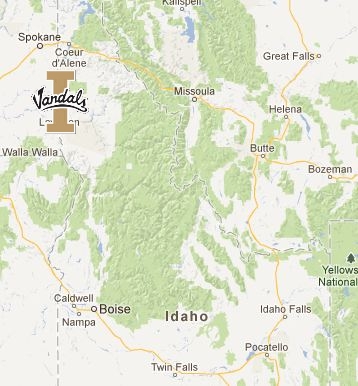 Best seasons:
1998: The Vandals went 9-3 and won the Big West conference. Two of its three losses were on the road against Washington State and LSU. Idaho's 36-35 overtime win at Boise State that season is the last time the Vandals beat Boise.

2008: With a strong passing attack, the Vandals scored 33 points per game en route to an 8-5 season. At one point, Idaho was 6-1 with wins over San Diego State and Colorado State of the Mountain West. Losing four of its last five regular season games against the WAC's top competition, the Vandals capped the season with a 43-42 overtime win over Bowling Green in the Humanitarian Bowl. Robb Akey's decision to go for two and the win in overtime is possibly the best moment in Idaho football history.

Player-Alumni
OL Mike Iupati (2009) Iupati was a first-round draft pick by the San Francisco 49ers in 2010, and has started every game since. (40/40 regular season games)

Coach: Jason Gesser, interim coach in 2nd game (0-1, .000)
Sixth-year head coach Robb Akey was fired three weeks ago after the Vandals gave up 56 first-half points to Louisiana Tech. Jason Gesser, the offensive coordinator and former Washington State quarterback, is the interim coach for the rest of the season.

Starting quarterback Dominique Blackman, the large lefty and junior college transfer, was kicked off the team after the Louisiana Tech game for breaking team rules. He had also been suspended for the season opener. Last week against San Jose State, both junior Taylor Davis and senior Logan Bushnell took played, with Bushnell getting most of the snaps.