Van Noy scored more points than anyone else on the field on Thursday night.

The BYU defense did it again. In a performance entirely fitting of BYU's 2012 season, the defense produced two touchdowns as the Cougars rolled the San Diego State Aztecs 23-6 in the Poinsettia Bowl on Thursday night.

Kyle Van Noy was the MVP of the win. With easy reminiscence to the 2011 opener at Ole Miss, Van Noy stepped up and made a game-winning play. Early in the fourth quarter with BYU trailing 6-3, Van Noy stripped SDSU QB Adam Dingwell in the endzone and recovered it for a touchdown.

That alone would be enough to garner MVP honors, but Van Noy was hardly done. With six minutes left in the game, Van Noy intercepted Dingwell and weaved across the grain to return it 17 yards for a touchdown and the 23-6 victory.

The defense also forced a fumble in between Van Noy's two scores, and on a short field Jamaal Williams punched in a 14-yard touchdown run.

Lest Van Noy get all the credit, it should be noted that Riley Stephenson and the punting unit downed four punts inside San Diego State's three-yard line.

But Van Noy was scintillating, and likely earned himself quite a paycheck in the NFL. His final stat line was:

Yes, all that happened in one game from one player. It led Bronco Mendenhall to do this...

...and the SB Nation mothership to proclaim Kyle Van Noy as the agent who ended the world, per the Mayan calendar's end... 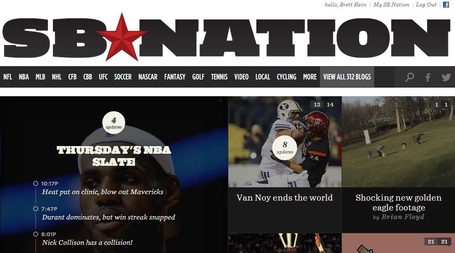 And the story of the game itself might be told in one GIF, as SDSU got close to touchdowns several times but never got one:

That sound you hear is your overall record against BYU moving to 7-28-1.

(You may need to mouse over and/or click on the GIFs if you don't see them playing.)

Aside from Van Noy himself, read this list and tell me this game didn't encapsulate 2012 BYU in 60 minutes:

Aside from Nelson's awful series, ending his career with an interception, James Lark was 23-42 for 244 yards, 0 TD and 2 INT. The lone true bright spot for BYU was Cody Hoffman, who saved bad passes and hauled in 10 catches for 114 yards. We have probably seen the last of Van Noy; I hope we get one more season of Hoffman.
I do also want to give Lark credit for standing in under fire, as the Aztecs dialed up blitz after blitz against BYU's struggling offensive line.
There are many questions to answer for next season: How does the offensive line get fixed? Who replaces the seniors on defense? But for now, it's nice to enjoy a win to cap the season, something Bronco Mendenhall has provided six of eight times during his tenure.
The 2012 BYU Cougars finish 8-5. And given the QB and offensive line troubles, maybe that's a really neat thing.